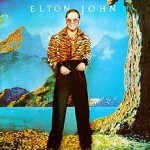 Recorded: February 1974 at the Caribou Ranch in Nederland, Colorado

Recorded at the height of Elton John's mid-'70s superstardom, the Caribou sessions were squeezed into a 10-day period in mid-February 1974.

Philip Norman's biography of John calls “Don't Let The Sun Go Down On Me” the album's “most troublesome track.” According to producer Gus Dudgeon, John was in a “filthy mood” when he recorded the song: “On some takes, he'd scream it, on others he'd mumble it. Or he'd just stand there, staring at the control room. Eventually, he flung off the (headphones) and said, 'Okay, let's hear what we got.' When I played it to him, he said, 'That's a load of… crap. You can send it to Engelbert Humperdinck and, if he doesn't like it, you can give it to Lulu as a demo.'”

John explained his tantrum by saying, “I used to find putting my vocals on in the studio a very cold process. I'd do two or three takes and then get fed up…We'd never have recorded a song like 'Don't Let The Sun Go Down On Me' for the Elton John album because I couldn't have sung it.”

After John left to perform in Japan, Dudgeon set about reworking the song, bringing in Beach Boys Carl Wilson and Bruce Johnston, along with Toni Tennille, to add backing vocals.

The latter move sat well with John, who's a big Beach Boys fan. In the liner notes of the Caribou reissue, he said, “The Beach Boys were a major influence on my work… Their sound, harmonies, the way they structured their songs — some of their records sounded so amazing, like nothing I'd heard before. The most perfect sounding album ever was Surf's Up by the Beach Boys.”

The song was very successful, selling a million copies and reaching Number Two in the U.S. and Number Six in Britain.

Despite poor reviews, the Caribou album was also a million-seller, and it hit Number One in both the U.S. and the U.K.

Shortly after its release, John signed a new contract that paid him $8 million for five albums. It was the biggest deal in the record industry at that time.