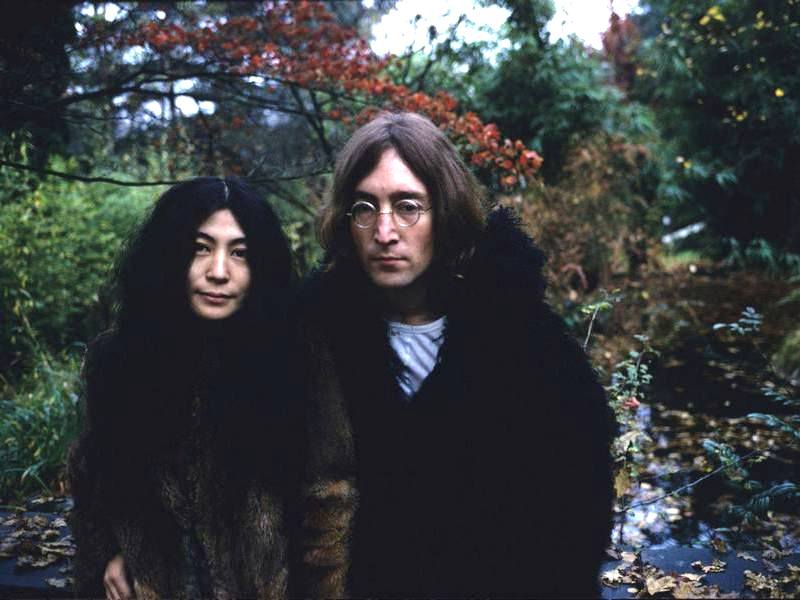 It was 55 years ago today (November 9th, 1966) that John Lennon and Yoko Ono first met. Yoko was preparing a conceptual art show at a London's Indica Gallery, which was owned by Lennon's friend John Dunbar. Lennon was invited to peruse the exhibition the night before the show opened, which led to the future couple being introduced. Lennon recalled the meeting to Rolling Stone in 1970, saying, "I got the humor in her work immediately. I didn't have to have much knowledge about avant garde or underground art, but the humor got me straight away. . . There was a fresh apple on a stand and it was 200 (British pounds) to watch it decompose."

Lennon eventually went on to sponsor several of Yoko's exhibitions, prior to the pair becoming lovers in the spring of 1968. Lennon and Yoko were married on March 20th, 1969.

George Harrison's first wife Pattie Boyd says that the days of all the Beatles' wives being a close-knit group pretty much ended with Yoko entering the inner circle: ["John fell in love with Yoko and that was that. She was more a man's woman than a woman's woman. She would never have girlfriends, I don't think, anyway. Y'know, that was fine, so I knew I'd never get close to her. She was quite friendly toward me. I mean, she and John once stayed in our house and she was just so intent on John all the time. John was her only focus, really and truly."] SOUNDCUE (:22 OC: . . . really and truly)

Despite the tension between Paul McCartney and Yoko over the years, in his recent book, titled McCartney, author Christopher Sanford uncovered a first-hand source that alleges that in 1966, prior to hooking up with Lennon, Yoko and McCartney were actually romantically linked. Sanford's unnamed source places himself at McCartney's London townhouse throughout the duration of a social call by Yoko.

Sanford says that judging from McCartney's taste in women alone, it's not too far fetched to believe that the affair took place: ["He was known for his attraction to women who were not necessarily, shall we say, traditionally good looking. And we have the source I mentioned, who says that (Paul and Yoko) displayed notable affection for each other. They went up the stairs, and he was seen hugging and squeezing her as she left later that afternoon."] SOUNDCUE (:20 OC: . . . later that afternoon)

John Lennon recalled that linking with Yoko Ono as his partner ultimately meant that his days as a Beatle were fading fast: ["But I presumed that I would just be able to carry on and bring Yoko into our lives, but it seemed I had to be married to them or Yoko. And I chose Yoko, y'know? And I was right."] SOUNDCUE (:10 OC: . . . I was right)

IN OTHER BEATLES HISTORY

Today also marks the 55th anniversary of what was rumored to be the day Paul McCartney died (November 9th, 1966). The legendary conspiracy theory that McCartney died in a horrific car accident was first brought to the public's attention nearly two years later, shortly after the release of the Beatles' Abbey Road album.

According to legend, an angry McCartney stormed out of a Beatles recording session in the early hours of November 9th, 1966, which was supposedly referenced by the band as "Stupid bloody Tuesday" in 1967's "I Am The Walrus." He then supposedly died in a car crash. And because the Beatles feared that their fans would never accept his death, they supposedly hired an unnamed winner of a British McCartney look-alike contest, named William Campbell, to replace McCartney. The band was said to have included various death clues in their songs and album covers to slowly break the news of McCartney's demise to fans.

The first hole in the theory, which many "Paul Is Dead" conspiracists seem to overlook, is that the Beatles didn't hold a recording session on that day — their first session that autumn was on November 24th.

A second obvious hole is that November 9th, 1966 actually fell on a Wednesday — a clue that some enterprising fans believed was referenced in "She's Leaving Home": "Wednesday morning at five o'clock."