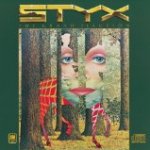 The Chicago-based Styx was named after the river of Hades that takes lost and condemned souls to their meeting with Satan.

The Grand Illusion, Styx's seventh album, was not an immediate hit. Though it charted when it was released in 1977, the album didn't take off until early 1978 when “Come Sail Away”–whose arrangement was similar to that of the band's 1975 hit “Lady”–hit the Billboard Hot 100, peaking at Number Eight.

The album's success also allowed Styx to perform for the first time in the U.K., in May of 1978.

The Grand Illusion was also a coming of age album for Tommy Shaw, who had joined Styx in 1976. His “Fooling Yourself (The Angry Young Man)” was the album's second single and a Top 40 hit.

The Grand Illusion has sold more than three million copies since its release.