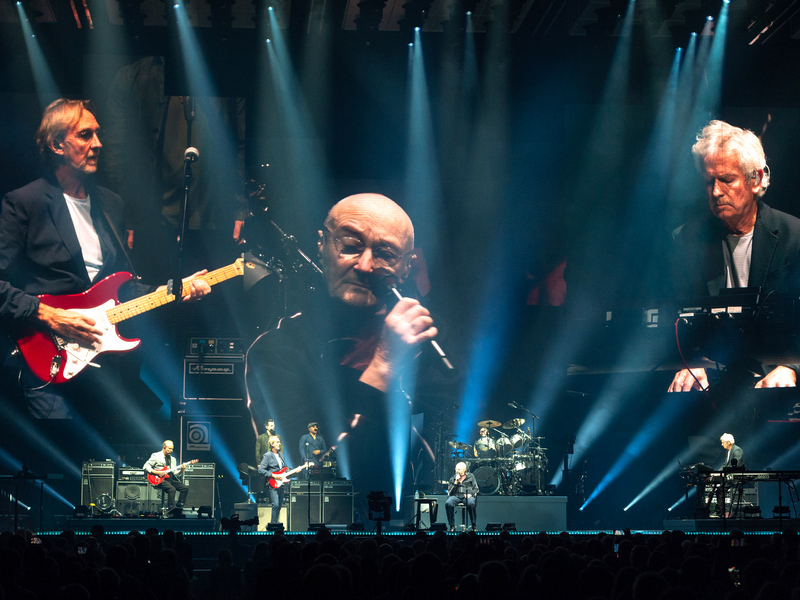 Genesis Back On The Road In North America

Genesis is back on tour, playing its first North American dates since 2007, with the shows destined to be the band's final shows on the continent. The group's “The Last Domino?” tour features bandmembers Mike Rutherford, Tony Banks, and a hobbled and sedentary Phil Collins.

The touring ensemble is rounded out by Collins' son Nic Collins on drums along with longtime guitarist and bassist Daryl Stuermer. The five-man band is supplemented for the first time in the group's career by a pair of backing vocalists — Daniel Pearce and Patrick Smyth.

Co-founder Tony Banks chatted with USA Today and spoke about the preparation for the tour, which featured what was once one of rock's most physical and engaging frontman, who now performs sitting down all night: “We spent a lot of time thinking about the vocals and slightly changed the emphasis of the set so it’s a bit less instrumental. Nic really plugs the gap very well and the visuals work in a way that a seated Phil isn’t as noticeable.”

Banks went on to sing the younger Collins' praises: “He’s a very versatile drummer and can sound like Phil when he was 18, 19 years old. He’s able to get that same kind of feel, so much so that it’s uncanny at times, like you’re playing with a young Phil. And he’s a lovely person to have on tour.”

On saying farewell to the band — and job — he's held since he was still in school, the now- 71-year-old Tony Banks explained, “We thought the 2007 tour would be the end, and this was never planned, so it was a nice thing to have happened. But it’s important to know when to stop something. . . So I’d say if you want to see Genesis, don’t put it off ‘til the next one. We’re not like the (Rolling) Stones.”

Although by no means a reluctant stage performer, co-founding keyboardist Tony Banks told us his primary duty in Genesis has always been that of a composer: “It's always been one of my major roles in this group to write music. 'Cause, y'know, back in the time when Pete (Gabriel) first left, y'know, Mike and I were definitely doing a lion's share of the writing, even before that. In the later part, y'know, slightly Phil's contribution came up more to a kind of level with ours. I mean that was the thing. I'd say it was very much an even thing on those last two Genesis albums.”