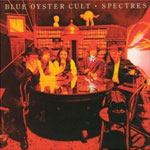 Roeser likes to point out a bit of serious message in the song, however. The closing lines, “History shows again and again/How nature points out the folly of men,” make reference to the fact that Godzilla was supposedly created by radiation dumping in the Pacific Ocean, making the song a cautionary tale of sorts.

Propelled by “Godzilla,” the Spectres album reached Number 43 on the Billboard 200 and was certified gold. It was, however, considered a bit of a letdown after Agents Of Fortune's platinum-selling breakthrough.