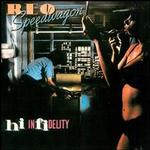 ‘Take It On The Run’ – REO Speedwagon

“Take It On The Run” was REO Speedwagon's second Top Five hit, following the chart-topping “Keep On Loving You.”

The song was actually lead guitarist Gary Richrath's answer to “Keep On Loving You,” which was written by frontman Kevin Cronin. Both men were going through marital problems while they were writing songs for the Hi-Infidelity album.

“Take It On The Run” was originally titled “Don't Let Me Down,” with different lyrics that were modified during the recording process.

“Take It On The Run” was certified gold as a single.

The Hi-Infidelity album was REO's most successful release, spending 15 weeks at Number One on the Billboard 200 and selling more than 10 million copies.

Cronin said at the time that Hi-Infidelity represented a very deliberate effort to improve upon REO's previous releases: “We were never represented right on record. That's one of the things that was different this time. We've gotten better in the studio and we've improved as writers. If we had gone to Number One with a crummy record, I'd be feeling pretty strange inside. But I love the album. It's what was in the back of my mind all those years. It's what kept us going.”