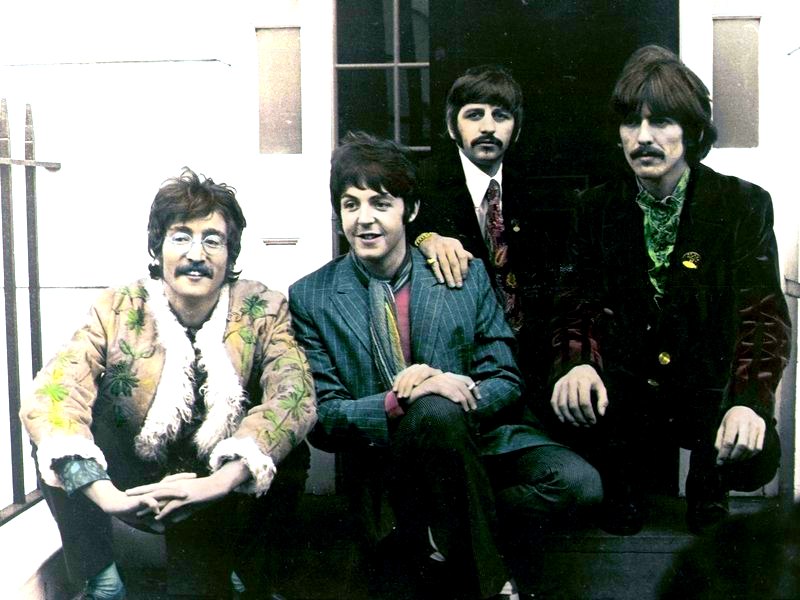 It was 26 years ago tonight (November 19th, 1995) that The Beatles Anthology premiered on ABC-TV. The three surviving Beatles, with the full cooperation of John Lennon's wife Yoko Ono, teamed up to produce the mini-series, which featured contemporary interviews with Paul McCartney, George Harrison, and Ringo Starr, as well as archival interviews with Lennon.

The project actually began almost immediately after the group's breakup in the spring of 1970. The Beatles' late right-hand man, Neil Aspinall, began compiling raw footage for the documentary, which was originally going to be called The Long And Winding Road. The doc, which was always on the group's back burner, was even mentioned by Lennon during a 1980 deposition in a lawsuit against the producers of the Broadway musical Beatlemania. Lennon went on record at the time as saying that the group would eventually reunite to cap off the documentary.

Flash forward a quarter-century, to when the group's story was spread out over three nights, with the first night world premiering the first all-new Beatles song in over 25 years, called "Free As A Bird." The song was originally an unfinished home demo recording by Lennon from 1977. In 1994, at McCartney's request, Yoko Ono presented the former Beatles with a total of four Lennon demos. Along with "Free As A Bird," McCartney, Harrison, and Starr recorded another Lennon song called "Real Love."

Although the trio decided to pass on embellishing on the already released Lennon demo of "Grow Old With Me" — there is a third unfinished Lennon track laying in the Beatles' vaults, featuring their aborted attempt to flesh out the late-'70s demo of "Now And Then" — also known as "I Don't Want To Lose You."

For their digital "reunion," the group used Lennon's piano and lead vocal as the basis for the tracks to complete two "all new" Beatles songs. "Free As A Bird" was released as a single in November 1995 and reached Number Six. "Real Love" was released in February 1996 and peaked at Number 11.

In the recent documentary, Mr. Blue Sky: The Story Of Jeff Lynne And ELO, the late-Tom Petty spoke about Lynne being offered the most coveted job in popular music: ["Well, he wasn't there by accident. It's a pretty good compliment that the Beatles got back together and hired you to be the (laughs) producer. That's, y'know, I'm sure they could've gotten anyone they wanted."] SOUNDCUE (:11 OC: . . . anyone they wanted)

Jeff Lynne recalled the scene on February 11th, 1994 when the surviving Beatles reconvened at McCartney's recording Sussex, England studio, The Mill, to begin working on the Anthology reunion tracks: ["It was all the three of 'em, they hadn't been in the same room for years. And so I'm just sittin' there with 'em, it's just like, 'Wow! I'm in the Beatles' club and they're having a club meeting and having a reminisce!' It was just superb! It was like, Hamburg stories, all the Liverpool stories — it was just magnificent! And I was willing to sit there forever and not do a bit of work and just listen to these stories."] SOUNDCUE (:22 OC: . . . to these stories)

Lynne remembered that creating a releasable Beatles record out of Lennon's mono demo of "Free As A Bird" was a long and tough battle: ["It was so hard to do. I mean, because, layin' that voice in there — which had a piano glued to it — was really difficult. It was almost. . . virtually impossible. But we got it done, somehow. And Paul helped on that, 'cause he sort of ghosted John's voice a little bit underneath and it came out really good in the end, for what it started out as, it was amazing. So, I'm pretty chuffed with it."] SOUNDCUE (:21 OC: . . . chuffed with it)

Paul McCartney recalled some of the technical hurdles the group faced while turning Lennon's demos into professional records: ["So, when we got in the studio, we had this cassette of 'Free As A Bird' — very bad quality. It was just a mono cassette, with John and the piano locked in on one track, which nobody would normally deal with, you'd just think, 'I can't deal with this,' but the song was so strong that we overcame those technical difficulties — or rather Jeff Lynne did, who was producing."] SOUNDCUE (:18 OC: . . . who was producing)

Stephen Bard, co-host of the groundbreaking Beatles podcast, 'Fabcast,' recalled watching the first Anthology episode and hearing the world premiere of "Free As A Bird": ["I thought it was done very well. I thought it was done with good intent. I thought that Paul McCartney sounded really good on it, vocally, in a way that he hadn’t been sounding to me, maybe, on Flowers In The Dirt and Off The Ground. There seemed to be a 'Beatle Paul-ness' to the vocal — y’know, he’s letting that Liverpool thing come in there. And that’s him riffing on John! Y’know, the original demo has John just singing that line over and over again, and Paul takes it and runs with it, and makes it something. I mean that, that. . . that’s heartstring stuff right there."] SOUNDCUE (:31 OC: . . . stuff  right there)

Bard went on to say that one of the most fascinating aspects of the Anthology series were the portions in which the surviving Beatles are featured together: ["A bit of that interaction that goes on in the Anthology is a bit strained. George keeps giving Paul a hard time (laughs) it’s. . .  and that’s what they do, obviously, that’s their relationship and that’s fine and all, but there’s a bit of an edginess there. There’s a little bit of a prickly energy between them, which in a way, I thought was interesting that they allowed to even air."] SOUNDCUE (:18 OC: to even air)

Shortly after Anthology's premiere, Ringo Starr talked about suddenly being a Beatle again after 25 years away from the band, recalling, "For 'Free As A Bird,' it was exciting for me to be with the other two. It was a very heavy time for me. . . I don't know if families have that much love, but I truly felt loved at the time."

As always, it was Lennon in the Anthology, through archival interviews, who was most honest and revealing regarding his emotions at the group's eventual split: ["It takes a lot to live with for four people over and over for years and years, which is what we did. And we called each other every name under the sun, we got to blows, we've been through the whole damn show. We know where we're at — we still do. We've been through the mill together for more than 10 years, y'know? We've been through our therapy together many times, y'know?"] SOUNDCUE (:24 OC: . . . many times, y'know)

One Beatle who was excluded from the Anthology was original drummer Pete Best. Although Best actually received a substantial payday for the 10 songs featuring him on The Beatles Anthology 1, he eventually used Anthology director and longtime McCartney filmmaker Geoff Wonfor to produce his own retrospective, the 2005 DVD Best Of The Beatles. We asked Best if he was ever approached to participate in — even in a non-appearing role — The Beatles Anthology: ["No, at the end of the day, that was their story as they wanted to tell it. I realized somewhere along the line that, y'know, whichever way they were gonna tell it, they weren't gonna dwell too much on me because it most probably would've caused complications. And I think that's primarily why it was about them. They wanted to tell their particular story and of course that left it wide open that my story — and the early days — to be told from the other point of views as well, and that's what the (Best Of The Beatles) DVD does."] SOUNDCUE (:27 OC: . . . the DVD does)

The same week as the Anthology TV premiere, the Beatles released the first of three double-CDs, also called The Beatles Anthology. The discs featured dozens of outtakes, rehearsals, demos and live appearances, from the group's first recording of Buddy Holly's "That'll Be The Day" in a makeshift recording studio in the spring of 1958, to the group's last recording session on January 4th, 1970.

All three volumes, released between November 1995 and August 1996, debuted on the charts at Number One. In the history of rock n' roll, no other band has achieved that feat — especially 25 years after their break-up.

Although both the Anthology 1 and Anthology 2 double-disc sets opened with new reunion songs — Anthology 3 did not. Jeff Lynne explained why work was scrapped on the third Lennon demo, "Now And Then": ["Well the thing is, we’d done two already, and that third one was only, like, a 'maybe,' anyway. It was never, like, a 'definite,' y’know? It was never a definite. We did a little bit on it — not much. We did a little bit of work; put the drums on. And then I think, actually Paul said in my documentary, that George went off it, I think — off the song — a little bit, so that’s why we didn’t pursue it any further, 'cause George didn’t fancy it.”] SOUNDCUE (:25 OC: . . .  didn’t fancy it)

Stephen Bard was among the many Beatles fans disappointed that "Free As A Bird" wasn't a Number One hit, topping out at a disappointing Number Six — with "Real Love" not even reaching the Top 10: ["I was disappointed that it only got to six, although I was impressed that 'Real Love' got as high as it did, 'cause I didn’t think it had the juice. 'Real Love' is a good record — don’t get me wrong — and they did it, again, they did it very well, but it’s not that great a song, in my opinion. I think it’s a good song. I think it’s a Lennon throwaway. Y’know, 'Real Love' doesn’t make it to the ’80 (Double Fantasy) sessions, if you’ll notice, ‘cause it’s not as good as the songs from the '80 sessions. 'Free As A Bird,' there’s just a magic to it. I think that it stiffed, ‘cause it was downbeat. Both records were excellent. It’s good it went to six, 'Real Love' did well. The 'Real Love' video was nice. The 'Free As A Bird' video, I thought, was brilliant.”] SOUNDCUE (:35 OC: . . . thought was brilliant)

The book version of The Beatles Anthology was released in 2000 with the tome debuting at Number Two on The New York Times non-fiction bestseller list. McCartney was very pleased with the book's success and sees it — and the expanded program's DVD release — as the culmination of the band's chronicles: ["It's beautiful, yeah. No, I'm very proud. I think it was really good. It was nice, you know, 'cause the Anthology's a huge sort of affair, and it's nice that it's a reasonable price so it's kinda quite accessible to people. I've had a lot of good feedback off it, a lot of people who really love it."] SOUNDCUE (:13 OC: . . . really love it)

Over a quarter-century since the "Fab Four" dominated the airwaves with The Beatles Anthology, director Peter Jackson's six-part documentary, The Beatles – Get Back, rolls out over three days, November 25th, 26th, and 27th, 2021, exclusively on Disney+.

The film has been compiled from over 55 hours of unseen footage, filmed by Michael Lindsay-Hogg in January 1969, and 140 hours of mostly unheard audio recordings from the Let It Be rehearsals and album sessions.