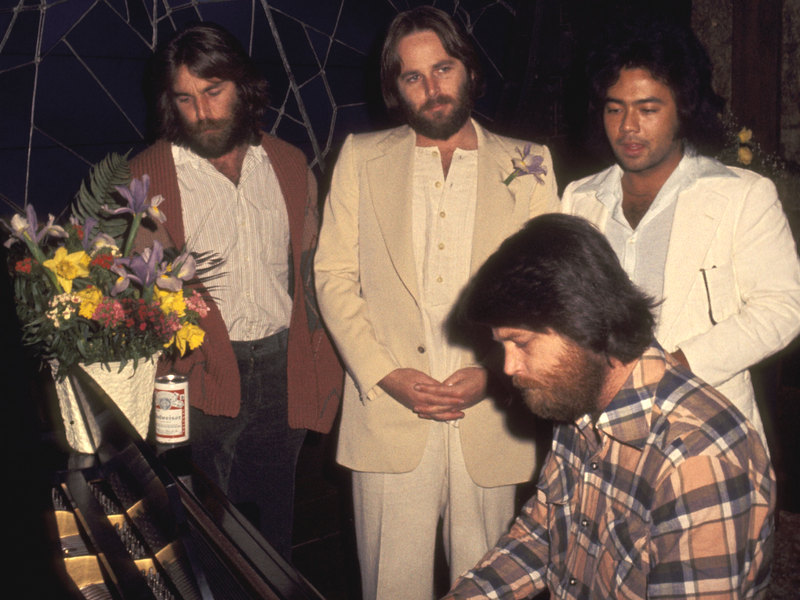 West Coast music legend Billy Hinsche (pronounced: HINN-shee), renowned for his work as one third of Dino, Desi, & Billy and decades serving as a Beach Boys studio and touring musician — not to mention riding shotgun on solo tours by the late-Carl Wilson and Al Jardine, died on November 20th of lung cancer at age 70. Sadly, his mother Celia died the same day at age 95.

Family friend Lucy Arnaz revealed online that Hinsche's death was swift, explaining he died of “Giant cell carcinoma. Only diagnosed a couple weeks ago. It ravaged him like an out of control train.”

Hinsche, who along with childhood friends Dino Martin — son of Dean Martin and Desi Arnaz, Jr. — son of Desi Arnaz and Lucille Ball — were mid-'60s L.A. power pop sensations as Dino, Desi, & Billy who remain best known for their pair of 1965 Top 20 hits, “I'm A Fool” and “Not The Lovin' Kind.”

That same year, Hinsche began recording with the Beach Boys, contributing harmonica to 1965's The Beach Boys' Party! album. The following year, the group's Carl Wilson married his older sister Annie Hinsche. Billy Hinsche enjoyed two stints as part of the Beach Boys' touring ensemble — from 1971 to 1977 and 1982 to 1996.

In recent years he performed with the children of Brian, Dennis, and Carl Wilson, Mike Love and Alan Jardine in the Beach Boys offshoot group, California Saga. He is survived by his sister Annie and her sons with Carl Wilson — Jonah and Justyn Wilson.

Billy Hinsche, you were more than just a friend, you were family, and we will miss you greatly, especially your laughter and off-color jokes in the dressing room. I can’t believe you’re gone but the thought of you going to the next world with your beautiful Mom Celia and reuniting with your Dad Otto along with Carl, Denny, Audree, Dino, Ricci and all of our loved ones that have passed, is very comforting to my heart. I love you Billy – Sail on, sailor

We lost a great friend, family member, and forever member of The Beach Boys band on Saturday. We’ll miss him greatly, especially his family members will feel his loss most deeply. All of us who had the pleasure of knowing him will miss his jovial nature and immense talent and sense of humor. Billy was a loving son to his mother Celia who incredibly passed Saturday as well. Very few of us knew the seriousness of his illness and Billy right up until his last couple of months didn’t let on to how serious his condition was. His wonderful sister Annie let us know that he was not long for this world. We are all so saddened by his passing, as Annie said, 'he has his Angel wings now' and joins his beloved Mother and Father along with my dear cousins Carl & Dennis, & Auntee Audree. The world misses you Billy, we were better for having your spirit, laughter, Talent, Friendship & Love. RIP Friend. We Love You Always — PEACE & LOVE, Mike, Jacquelyne & Family

I can't believe you are gone. My memories of you growing up laughing, joking, playing the keyboards, Carl's bestie, Annie's brother , Celia's son, Dino Desi and You. . . my Uncle Billy. Sgt. Bilco. You're hair that was always great. . . I watched it turn gray over the years but your energy never got old. Thank you for making this world a better place with your relentless spirit and sense of humor. You're talent was so huge and you were always one step ahead of us all with your ideas and creativity. It's really f***ed up & hard to think about that Cancer took you so quickly… but I swear to God the only thing that makes me feel a little relief is that you and Grandma passed on together and that Otto, Carl, Dennis, Audree, all the grandparents and loved ones are greeting you. Fly peacefully and I know you will live on forever. We won't stay sad for long because you wouldn't want that. Eat some Lumpias for us all with Grandma Celia up there. I will miss you.

Rest In Peace Billy! Billy (Hinsche) was a good friend to the Flames when the S(outh) Africans landed in LA. Brother Billy, my father's name, was the welcoming committee for The Flames when the South Africans landed in Los Angeles Summer 1969, pleasant funny caring loving and after all who gave this African, the introduction to A TACO and later an Orange Julius and took us up and down sunset boulevard (long street) cruising by Dino’s on sunset. Rest well Brother Billy we appreciate your spark of light down here. Hamba Gashle (go Easy) Amen Safe Passage Billy — B C

We’re heartbroken by the passing of one of our dearest friends for over 50 years…Billy Hinsche. We shared countless days on and off the road traveling with him as a member of the Beach Boys band. Along with his musical talents, his good spirits and sense of humor always brought smiles and laughter. He will be missed.

Billy Hinsche remembered playing on his first Beach Boys session back in 1965 for their Party! album, contributing harmonica on “Mountain Of Love” — performed at the tender age of 14: “It was loose, it was kinda like a party. Y'know, it wasn't like a formal session that I had witnessed before with the Wrecking Crew sitting around and music stands in front of them and everybody reading charts. It was just loose and fun and and as close to a real party as you could imagine, like in someone's living room.”

Dino, Desi, & Billy were among the Beach Boys' favorite opening acts, Back in August 1967 the group opened for the Beach Boys at their legendary 1967 Hawaii shows, which featured Brian Wilson's brief return to the touring ensemble: “They flew or shipped Brian's big old white Baldwin organ (laughs) over there to begin with, and to see it onstage was really something, because I remember seeing it at his house. I remember them (during rehearsals) gathering around going over parts, and Carl was playing a Hofner bass. I think they were opening with 'The Letter,' because Carl loved that song by the Box Tops. It was an island crowd — there were more mature people in the audience. It's just that they were more mellow. It was an island, laid-back island audience.”

Billy Hinsche told us that he was at the Beach Boys' Brother Studio in Los Angeles and watched Carl Wilson help lay down the backing vocals to Elton John's 1974 Top Two hit, “Don't Let The Sun Go Down On Me”: “Yeah, (producer) Gus Dudgeon brought the tracks down and they were not complete. It was Elton at the piano, drums, bass, guitar, tambourine; and then — based on Carl's vocal — they built that whole arrangement around what Carl came up with in the studio (sings the part). They tailored that arrangement to Carl's parts.”

Back in 2017, Billy Hinsche hit the road as part of Brian Wilson’s touring band after usual bandleader Darian Sahanaja was forced to miss the dates due to a prior commitment with the reunited Zombies. Hinsche told us that despite knowing this music inside and out — he's still got his work cut out for him on these shows: “It’s going to be probably the most complicated keyboard I’ve ever played in recent memory, because he’s got everything programmed to match the appropriate sounds to match the songs — so, it’s intense. It’s more than just playing it and singing it and playing. It’s making sure I get the right sound for the appropriate song. For instance, the piano sound for ‘Heroes (And Villains)’ is not the same sound as the sound for ‘(Little) Deuce Coupe,’ and so on.”

Later in life, Billy Hinsche put his UCLA film school education to use by editing and releasing much of his early-'70s footage of the Beach Boys at work and at play. Hinsche discovered that not only was he literally sitting on a historical goldmine — but that the unseen video told a fascinating and linear story of the group — who that year were named “Band of the Year” by Rolling Stone magazine: “I was working on the Carl (Wilson) thing when it dawned on me after doing 20 interviews, it dawned on me, 'Wait a minute, wait a minute, 1974, man — I've been messing with this footage, I've done the One In A Million (film), and y'know I've edited every little snippet of Dennis out of the 1974 footage and put it to that song I wrote 'One In A Million,' for him, then I did the Dennis Wilson: Forever (film) which uses the cut-a-ways — I've got a complete movie here, man! And all I've got to do is edit it together!'”

Hinsche said that the project made him want to continue showcasing the legacy and brilliance of Dennis and Carl Wilson for the 1974: On The Road With The Beach Boys film: “Without trying to get too heavy about it, I had sort of a realization while I was doing this — and it was the agony and the ecstasy — I had so many moments where I thought I had failed, that I had lost, there were in fact corrupted files that I had to remove. It was very frightening for me and disheartening at times. The thought occurred to me that maybe this is my destiny now at this stage of my life. To keep Carl and Dennis alive in these films. I think maybe that's a new role in life, now that I'm back into films, y'know?”