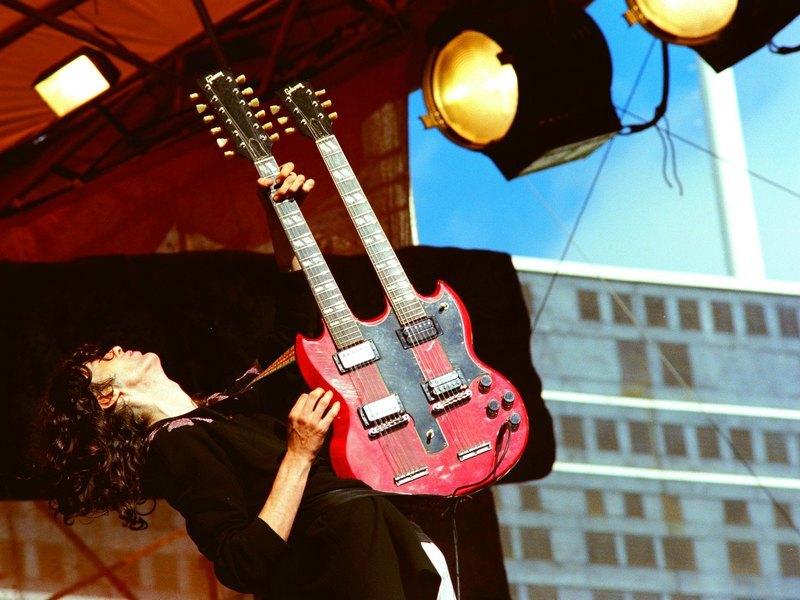 Jimmy Page is thrilled that his long-forgotten cameo on a Rolling Stones song finally saw the light of day over 45 years after the track's recording sessions. Back in 2020, the Stones finally released their 1974 team-up with Page on the Mick Jagger / Keith Richards original, “Scarlet,” which was featured on the deluxe expanded edition of the Stones' 1973 Goats Head Soup reissue.

In a new interview with Total Guitar, Jimmy Page recalled the now-legendary session: “Ronnie Wood had a house called the Wick in Richmond. . . It had a studio in the basement when Ronnie was there, a proper full studio, with a playing room and a control room where you're looking through the window into the playing area. I was asked over there by Ronnie, who said there was going to be a session with Keith (Richards). So, Keith ran through this song with (Blind Faith's) Rick Grech on bass and a guy named Bruce Rowland (of the Grease Band and Fairport Convention) on drums.”

He went on to remember, “I just came up with a guitar part as I would if I was playing with my own band. Keith was playing the main riff and I was coming up with things to complement it. I was playing around what he was doing. So that was done in one evening and they were going to carry on with it the following day at Island Studio, and I said, 'Well, I'll come along and put the solo on it.' I got there quite early on in the evening, had a couple of passes at the solo, and that was it. (Mick Jagger) was doing his stuff the day after that, so I left after I did my bit.”

Of “Scarlet” finally seeing release, Page said, “It was fun, but I never thought it would come out. . . Keith's playing great, he always did and I'm happy with the guitar playing on it. I thought that was cool, so it's nice to have that. . . It's unusual to hear me playing at full acceleration, if you like, outside of Led Zeppelin.”

Last year, Mick Jagger appeared on BBC Radio and shared his recollection of the recording session: “'Scarlet' — I'd completely forgotten about this one. It was recorded in Ronnie Wood's basement of his house. It was Keith, and me, and then Jimmy Page turned up for some reason. And we had various other musicians. Since then, I've completely forgotten about it. And then someone told me it was Ginger Baker on drums. And I rang Jimmy Page up and Jimmy Page remembered everything: 'No, this was the person that played on it. . . ' and 'It wasn't Ginger Baker. . . ' But he seemed so certain about it, and I said, 'Alright.' Here it is — it's one of the extra tracks that we've put on Goats Head Soup.

Jimmy Page explained that even with identical musical gear, a guitar player's creative fingerprint will always shine through: “Through the years, guitarists that you know — certainly within the electric guitar — will say if you had four guitarists that you know and a guitar and an amplifier there, they would come and play it and they would sound exactly like they sound. Because of the tactile aspect of the instrument is feeling, an incredible phenomenon — but it's absolutely true. And yet, I would play it and I wouldn't sound anything like any of them.”