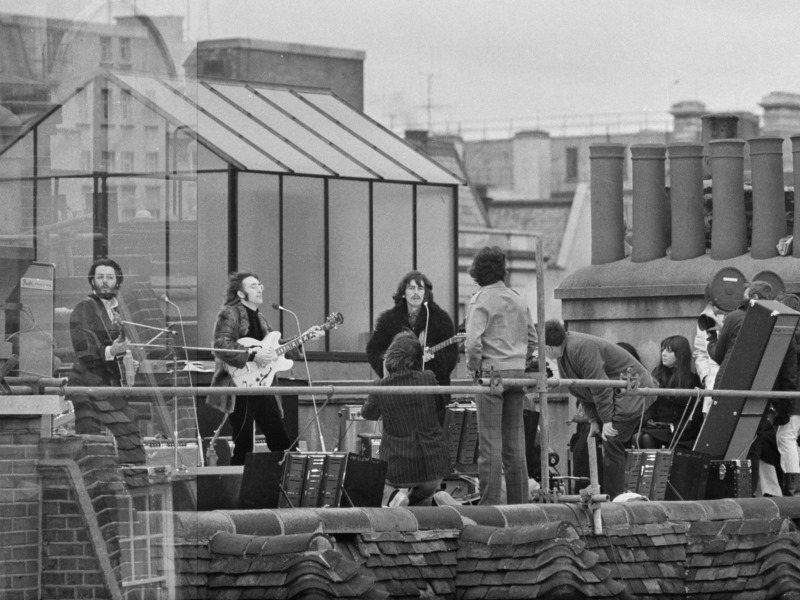 Cop Who Tried To Shut Down The Beatles’ Rooftop Gig Speaks

For Beatles fans who watched Peter Jackson's brilliant three-part, nearly-eight hour Get Back documentary on Disney+, two improbable scene stealers are the two British police offices tasked with shutting the Beatles down. The sight of the two very young English bobbies trying to ascertain where the noise complete are stemming from as the Beatles rock out on the roof in London's open air is priceless.

Ray Shayler — a constable at the West End Central police station — accompanied the even younger officer Ken Wharfe to the Beatles' headquarters at 3 Saville Road in an effort, in the most polite and English way possible, to ask the Beatles to please turn the music down.

Shayler, who's now 77 and retired, spoke to The Daily Mirror and recalled the music being loud in the surrounding area: “I wouldn’t say I was a fan — I didn’t like the Beatles much when they went a bit Hare Krishna but we had a few Beatles records and LP's at home; I liked their music. But when I got on the roof, I had a job to do and I thought, 'Well, we’ve got to try and stop this.'” I asked (Beatles roadie Mal Evans) how long it was going on for. He said, 'One more record, 'so I said, 'You might as well be hung for a sheep as for a lamb. Get on with that one and then it stops.' It was a discussion; it never got heated.”

Shayler went on to recall the Beatles leaving the rooftop and walking past them: “George (Harrison) and John (Lennon) didn’t talk to us, but there was a reason for that. They’d recently been caught with cannabis or something (sic) and were on bail — it’d been in the papers.”

He went on to recall, “Paul (McCartney) was apologetic about the concert and Ringo (Starr) joked about the whole thing, saying, 'Don’t put the handcuffs on me!' Then they went down the stairs, we followed and that was that.' As the event passed with such little incident, Ray admits — astonishingly — 'I didn’t even put pen to paper to record it.”

When pressed about what he and his partner would've done had the “Fab Four” decided to keep playing despite the police requesting them to pipe down, Shalyer said, “If the Beatles had got stroppy or were determined to carry on, then things might have been different. But that wasn’t the way we worked in those days, and I always tried to resolve issues without arresting people.”

Shayler went on to say, “Actually, someone asked me how I felt being the man who stopped the Beatles' concert. But I wouldn’t say that was true. I didn’t stop the Beatles — I merely suggested it would be a good idea if they didn’t carry on.” Shayler then joked: “Now, if it had been the Rolling Stones up there on the roof.”

Ken Mansfield, the former U.S. manager of Apple Records, recently published his latest memoir on his time with working with the Beatles, titled The Roof: The Beatles’ Final Concert. Mansfield was among the handful of insiders present at the rooftop concert that day. He recalled prior to the lunchtime gig walking in on the four Beatles who were using one of the Apple offices as a makeshift dressing room: “It was like walking in on a band, a nervous bunch of guys getting ready to do an audition. I don't know if it's because they hadn't played together, or whether they were trying to put the set together, but it was one of those kind of tense things where they were nervous. When we locked the doors upstairs, and the minute they started playing — and y'know all the. . . everything that was going down, all the stuff. It's like it all went away and I really believe in my mind that they forgot everything and they were what they were. They were the Beatles.”