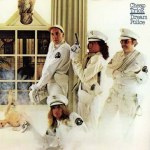 Building off the unexpected success of its Live At Budokan concert album, “Dream Police” was Cheap Trick's biggest studio hit to that point, reaching Number 26 on the Billboard Hot 100.

The group has acknowledged that following up a successful live album was intimidating. “It's hard when you don't really know what made you famous,” explained drummer Bun E. Carlos. “We didn't know why people liked the live versions and not the studio versions. We didn't know what to do next.”

The production of “Dream Police” was Cheap Trick's most ambitious yet, with bombastic orchestrations and an odd-ball mid-song monologue segment from guitarist Rick Nielsen.

The Dream Police album reached Number Six on the Billboard Top 200 — just two notches below At Budokan's peak — and was certified platinum for sales of more than a million copies.