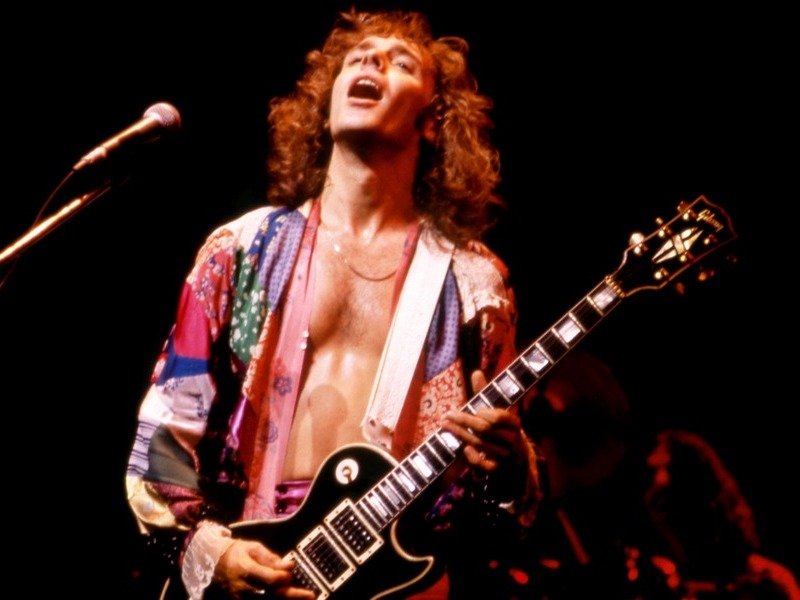 It was 46 years ago this week (April 10th through 16th, 1976) that Peter Frampton's fifth album, the blockbuster, Frampton Comes Alive! hit Number One on the Billboard album charts for 10 nonconsecutive weeks. The album featured the hit singles "Show Me The Way" (#6), "Baby I Love Your Way" (#12), and "Do You Feel Like We Do" (#10) — all of which, amazingly, remain in constant rotation on classic rock radio. In January 2001, for its 25th anniversary, Frampton reissued a remixed and expanded version of Frampton Comes Alive! — including four tracks that were not included on the original double album — "Nowhere's Too Far (For My Baby)," "Just The Time Of Year," "White Sugar," and a radio performance of "Day's Dawning."

Although Frampton Comes Alive — which has sold over eight million copies to date — took Frampton and the rock world by storm, since leaving Humble Pie in 1971, he'd slowly been making substantial strides in his solo career, inch-by-inch: ["My studio albums had a cult following (laughs), a small cult (laughs) to start with and building up to the Frampton record; the one in '75, which included 'Baby I Love Your Way' and 'Show Me The Way.' And that one did sell a lot more — more than the other three put together — Wind Of Change, Frampton's Camel, and Something's Happening. I was starting to do reasonably well, but still haven't really broken through in the way that, y'know, the next record we hoped would be gold."] SOUNDCUE (:32 OC: . . . would be gold)

Frampton told us that back during the original Frampton Comes Alive era, his legendary black Gibson Les Paul was a warhorse onstage and unlike today — when due to various tunings, he can go through half a dozen guitars during a single show — the guitar had to handle everything Frampton threw at it: ["We didn't have more than one guitar in those days, y'know. If you wanted another guitar, you sold the one you had to get another one (laughs). So it was only. . . I think I had a white backup Les Paul — that was about it. And nobody really had backups of things — that was it. I think if there was different tuning for 'Nowhere's Too Far (For My Baby)' I would do it before the number onstage by myself. I don't tune myself anymore; I have someone I pay to do that (laughs) — fancy schmancy, yeah!"] SOUNDCUE (:32 OC: . . . fancy schmancy yeah)

Frampton recalled to us the precise moment in 1976 — when out of the blue — he realized that he was rock's latest mega-superstar: ["A record signing in Detroit when the live album just came out. I had no bodyguards or anything like that, and just, y'know, a limo driver and me; that was it and we just go to this store. And they expected 150 people for me to sign Comes Alive when it'd just come out. Of course, it was pandemonium and the place, they had no secur. . . well, relatively no security there. And I remember having to fight to the limo — we had to abandon the signing because it got way out of control and there have got to be (laughs), I don't know 5,000 people. It was ridiculous."] SOUNDCUE (:35 OC: . . . It was ridiculous)

We asked Peter Frampton to recall the moment when the live album became almost bigger than him: ["The day that my manager called and said, 'Guess what?' I said, 'Tell me.' He said, 'We're Number One.' I remember going to a party for ELO and Stanley Sheldon's wife, Judy, just went over to me and said, 'Peter, do you realize that everyone in this room is staring at you?' This was something new and no one was paying attention to ELO, so obviously I went over to them and as I went over, it seemed like the whole room moved with me. That was what my life was going to be like from then on, for quite a few years."] SOUNDCUE (:30 OC: . . . a few years)

Frampton's former label chief, A&M Records co-founder Jerry Moss, remembered the post-Comes Alive! period as the beginning of Frampton spreading himself too thin, beginning to wear out his welcome with fans, and ultimately heading for a career meltdown: ["I think the year pretty much exhausted Peter. I think he worked so hard and did so many things; y'know, he wanted to remember the disc jockeys, he wanted to remember the press. Y'know, it's a lot of emotion when you put on shows in front of 200,000 people, and he never took any time off — and I think it took it's toll and he got pretty exhausted. And so, I don't know if I could've said anything or done anything, but this was the way it was. People were hungry for him and he answered their call."] (:26 OC: . . . answered their call)

Frampton told us that the multiplatinum success of Frampton Comes Alive! only five years into his solo career, put a great strain on him artistically, and at a time when he desperately needed guidance on how to handle his career — it was nowhere to be found: ["As (writer) Cameron Crowe put it, 'It was like Peter was strapped to the nose-cone of a rocket, he went through the ceiling of the sky, got out, stood there and realized there was nobody else there at all. He was totally alone.' And that pretty much sums up the way I felt."] SOUNDCUE (:16 OC: . . . way I felt)