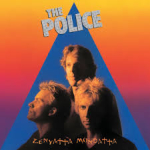 ‘Don’t Stand So Close To Me’- The Police

Producer: The Police and Nigel Gray

The Police's second consecutive Top 10 hit in the U.S., “Don't Stand So Close To Me” tells the story of a schoolteacher dealing with the temptations and frustrations of a flirtatious student.

Though singer-bassist Sting was a schoolteacher before becoming a musician, he's always denied that the song was based on one of his own experiences. He's said it's a reflection of the effect he felt the band was having on young female fans at the peak of their career.

Sting has been both praised and blasted for his reference in the song to author Vladimir Nabokov, who wrote the book Lolita and coined the phrase “nymphet.”

The song peaked at Number 10 on the Billboard Hot 100 and at Number One on the U.K. pop chart.

The Zenyatta Mondatta album was recorded in Holland for tax reasons.

It was coproducer Nigel Gray's last album with the band. He had a falling out with manager Miles Copeland over money shortly after it was released.

Zenyatta Mondatta peaked at Number Five on the Billboard 200 and Number One in the U.K.