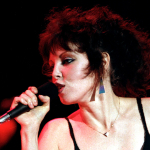 ‘Promises In The Dark’ – Pat Benetar

The second single from Pat Benatar's third album, “Promises In The Dark” reached Number 38 on the Billboard Hot 100.

Benatar started writing the song on an airplane flight while on tour for her previous album, 1980's Crimes Of Passion. She recalled, “There was a hum in the cabin that inspired the melody… When we got back home I wanted to play it for Neil (Giraldo, her guitarist and, at the time, her boyfriend), but I was still kind of shy about writing lyrics, especially when they were about him. One night I slipped them under the door, because I was too embarrassed to show it to him face-to-face.”

Benatar wrote the song on piano, but Giraldo turned it into a more energetic rocker: “I stumbled across a guitar riff that felt pretty good at the time and started to feel the tone of the arrangement beginning to change. Funny things happen when you replace ivory with steel.”

The song wasn't finished when Benatar and Giraldo took it into the studio, where they came up with the final verse and lyrics for the bridge.

That's Giraldo doing the “1-2-3-4” count-off before the final chorus. “The track was recorded basically live in the studio, so I kept it in the mix as it happened,” he said.

Both Benatar and Giraldo call “Promises In The Dark” their favorite song on Precious Time. “It was the beginning of our collaborating based on our own relationship… sentimental, like a musical scrapbook,” Benatar said.

Precious Time was Benatar's only Number One album, topping the Billboard 200 on August 15th, 1981.

The album also marked the emergence of Giraldo, who was credited as its coproducer, as Benatar's chief creative collaborator.