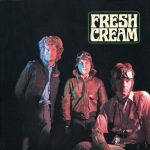 Cream's second single, "I Feel Free" was a hit in the U.K., reaching Number Six on the pop chart there. It did not chart in the U.S. but did get airplay on early FM rock radio stations.

The trio was hailed as rock's first supergroup and defined the power trio format. According to Clapton biographer Ray Coleman, "They made musicianship hip."

Cream played its first concert — under the members' individual names — on July 31, 1966 at the sixth annual Jazz & Blues Festival in England.

Pete Brown was recruited as Cream's chief lyricist by Jack Bruce. "When we were jamming and working on riffs during those first rehearsals, I felt that we had to get someone in who could write lyrics. Pete Brown immediately came to mind, because I had some gigs at the St. Pancreas Town Hall that were called Jazz and Poetry. As the jazz players sat onstage, the poets would come up and read their work in front of the audience. Pete Brown was one of the poets I really liked."

While the first Bruce-Brown collaboration, "Wrapping Paper," was something of a disappointment, Bruce says he was "quite pleased" with "I Feel Free." "Even though I hadn't had much experience in recording studios prior to Cream, I had very definite musical ideas about he songs I had written. I wrote all of 'I Feel Free' out on paper, including all of the parts, because that was the way I was still working in those days. Because of my classical background, it was easier for me to just write things down and then try to realize them in the studio. I know that Ginger thought the song could have been recorded better had we recut it, but after a little — shall we say — discussion, it was agreed that we might end up losing what we liked by trying it again."

Fresh Cream hit Number 39 on the Billboard 200 while reaching Number Six on the U.K. chart.