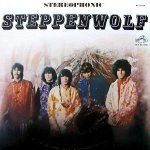 ‘Born To Be Wild’ – Steppenwolf

Steppenwolf formed in 1967 in Los Angeles. All but guitarist Michael Monarch came from the Canadian band Sparrow.

Mars Bonfire, born Dennis Edmonton–the brother of Steppenwolf drummer Jerry Edmonton–came up with the idea for the song while walking in Hollywood. “I saw a poster in a window saying 'Born to Ride' with a picture of a motorcycle erupting out of the earth like a volcano with all this fire around it. I put it together with a reworking of a John Hammond riff, borrowed a tape recorder…and put it down on tape.”

After getting the tape, lead singer John Kay wrote in his autobiography, “I thought it had killer lyrics and an interesting guitar riff but sounded somewhat puny on Dennis's demo…We picked up the tempo a bit from the demo and found a key that worked for me. I don't remember spending more than an afternoon transforming it from the demo to our version, but once we were through, it was ours.”

Executives at ABC-Dunhill decided against “Born To Be Wild” twice as a single before listening to impassioned pleas from the band and producer Gabriel Mekler. Remembers Kay: “The head of the label, Jay Lasker, would run potential tracks by his teenaged son and daughter to get their reactions, and his daughter Marcy–who had recommended that he sign the band in the first place–preferred 'The Girl I Knew.'”

The song enjoyed a second life when it was featured as the signature tune in Dennis Hopper's hit 1969 film Easy Rider.

Among the great ironies of the song is that gruff-voiced singer Kay could not ride motorcycles because of his poor eyesight.