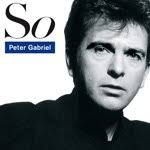 ‘In Your Eyes’ – Peter Gabriel

Though it's one of Peter Gabriel's richest and most moving love songs, it's unclear exactly who the subject of “In Your Eyes” is. He had not yet split from his wife Jill, but there were rumors that he had already begun seeing actress Rosanna Arquette when the song was written and recorded.

The second single from the So album — following “Sledgehammer” — “In Your Eyes” peaked at Number 26 on the Billboard Hot 100.

A longer version of the song with a slower intro was recorded, and was available on the CD single.

Senegalese singer Youssou N'dour, who provides counterpoint vocals in the song, toured as Gabriel's opening act on the So tour.

The So album was a substantial commercial breakthrough for Gabriel, hitting Number Two on the Billboard 200 and Number One in the U.K. It was Gabriel's biggest album of the '80s, and it's sold well over five million copies.

His first road dates after the album's release came on the six-show Conspiracy Of Hope outing for Amnesty International, which also featured U2, Lou Reed, Sting, Bryan Adams, and Lou Reed.