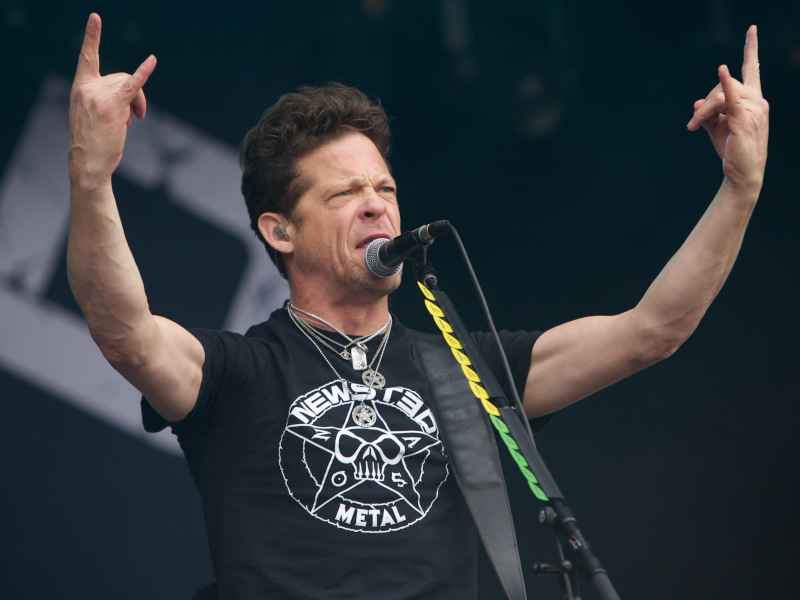 After ending up with egg on his face for revealing tentative plans regarding a Van Halen reunion, ex-Metallica bassist Jason Newsted is choosing to instead blame the reporter for printing his ultra-newsworthy quotes regarding the project.

Blabbermouth transcribed some of Newsted's interview with West Palm Beach, Florida's 98.7 The Gater, in which he complained that rather than focusing on a benefit show he was playing with the Chophouse Band, The Palm Beach Post ran with his revelation that he was at one time tapped to playing in a revamped version of Van Halen.

Newsted spoke about the item, in which he let it slip that David Lee Roth, Alex Van Halen, and Joe Satriani were planning some sort of Van Halen outing: “That was bad, dude. I'm not happy about that. I'm really, really not happy about that. I don't do very many interviews anymore, and I agreed to do that to promote the show for the kids. So if I go to talk about that, and I mentioned two little things over here about the calls that I've received in the past 20 years from whoever it is — Alice Cooper, Aerosmith, whatever; man, whatever — I was just listing a list of the calls that I received over time that never went anywhere.”

He went on to say, “I only said yes to a couple of the 30 that I received, and I mentioned a couple of them that impressed me. People that if I wouldn't have had their records, I wouldn't play the way I do, they called me on my home phone and said, 'You wanna come and jam with us?' Dude, I'm off the ground; I'm levitating. I'm, like, 'Why would Aerosmith call me?' That's a big frickin' deal to a kid. Just a kid from a farm in Michigan, dude, and a guy from Aerosmith calls and asks me to play bass? However many years later when you stole that album from your brother's collection. It's frickin' huge. That's all I was doing. I talked about two seconds about that, and that's what they chose to go for. They didn't talk about the Conservatory, the kids' classes, the things that we're doing, the Chophouse Band, why we do that we do.”

Newsted, who disinvited the reporter to the benefit show he was initially being interviewed for, seems to remain unaware that it was he who spilled the beans on the Van Halen reunion plans — and in no way was tricked into doing so by the reporter — who actually knew nothing about it — adding, “That really rubbed me wrong. I don't know what interviews I'll do again. I'm not sure if I'll say yes to anything.”