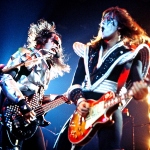 “Deuce” was one of the earliest songs Gene Simmons wrote for Kiss, basing it on a bass line drawn from the Rolling Stones' “Bitch.” “Once I had the bass figure, the rest of the song pretty much wrote itself,” Simmons said.

Like many Kiss songs, “Deuce” deals with sex and particularly Simmons's idea that a working man deserved a double after a hard day on the job. “I had a sense of what I wanted to write about, which was that guys work all day, bring home the money, and the least the girl who stays at home could do is to support the guy. That was the intention — that perhaps he's worth twice as much as she is. But those were the early days, and as you move on you live and learn.”

Kiss singer-guitarist Paul Stanley suggested the opening riff for “Deuce,” which he confessed was drawn from another popular rock song: “The beginning of 'Deuce' was me ripping off the Raspberries. The thing that starts it off is me bastardizing 'Go All The Way.'”

“Deuce” was also the song Simmons, Stanley, and drummer Peter Criss used to audition lead guitarist Ace Frehley. He recalled, “They said, 'We're going to play you a song, give it a listen, then try playing along.' The song was 'Deuce,' and they played it as a three-piece in the key of 'A.' I thought, 'That's easy enough,' so I got up and wailed for four minutes, playing lead work over it. It's my favorite Kiss song.”

Kiss's self-titled debut album received a lukewarm commercial reception, peaking at just Number 87 on the Billboard 200 chart. The album eventually went gold in the wake of the breakthrough success of 1975's Alive!