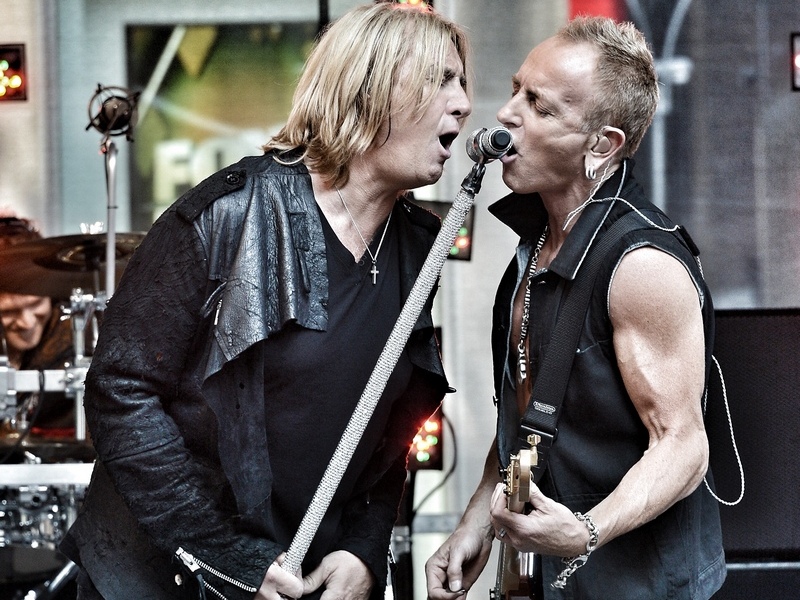 Def Leppard Might Record Virtually From Here On Out

Def Leppard enjoyed the process of recording virtually so much during the pandemic — they're looking to keep doing it in the future. Frontman Joe Elliott shed light on howe the band recorded their new album, Diamond Star Halos, which drops on May 27th, telling Classic Rock magazine, “It was so exciting to wake up in Dublin and see a message from (guitarist) Phil (Collen) with a new idea. This was a whole new way of working for us — and I don’t think we’ll ever do an album the traditional way again. This way, there was no pressure. And the record doesn’t sound disjointed. It sounds like a band all on the same page, which is what we are.”

This time around, guitarist Viv Campbell sat out of the composing duties for the album, admitting, “I just wasn’t ready this time. That’s the bottom line. I thought we were going on tour, and then it was: 'We’re making a record!' I was in full panic mode. I do feel bad for not pulling my weight. But it wasn’t like we were short of songs.”

Joe Elliott added: “Vivian was happy to do the Ronnie Wood thing on this record. But his contribution to this record is immense from a performance point of view. His (Jimi) Hendrix-like solo in 'This Guitar' is superb.”

In pulling the “diamond star halos' line from the 1971 T. Rex classic “Get It On (Gang-A-Gong) for their album title, Joe Elliott explained, “Whenever people take a dig at our lyrics, we’ve always said: 'We’re more Marc Bolan than Bob Dylan, more 'hubcap diamond star halo' than 'the answer is blowin' in the wind'! So when Phil suggested the title, we all went: ‘F***, yes!’ Glam is in our DNA. We’re all big fans of (Led) Zeppelin and the (Rolling) Stones, but really, in a musical sense, we were born on Top Of The Pops — (David) Bowie, Bolan, Slade, Sweet. With this album we’ve gone back beyond the '80s to the '70s and all the music that inspired us as kids. Yet it still sounds like 2022 — even though we did it in 2020.”

Leppard will be out on the road all summer with Motley Crue, Poison, Joan Jett & The Blackhearts with opening night set for June 16th at Atlanta's SunTrust Park. Guitarist Phil Collen can't contain his excitement for finally being back on tour: “We feel like we're moving into a different league. There's a lot of bands who have stopped tourin' stopped performin' — lost interest. We're the complete opposite. We're rarin' to go, so it's gonna be bigger and we've got this album that's amazin' — and tourin' — we're a great live band. Y'know, we put pride in all the vocals and everything we do and we can't wait to get out there and prove that. 'Cause, since we were out last time, there's less out there.”