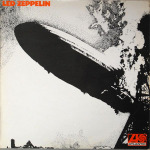 The chiming “Going To California” is an outgrowth of the acoustic work Led Zeppelin began on its third album and pursued throughout its career.

The song's original title was “Guide To California.”

The lyrics were inspired by a trip to California, during which the group experienced an earthquake–thus prompting the line about the mountains trembling and shaking.

Led Zeppelin's fourth album found the group returning to the Headley Grange mansion where it also recorded Led Zeppelin III, a setting the group enjoyed more than the traditional recording studios where it had made its first two albums.

Unhappy with the mixed reception the third album received, Led Zeppelin opted to put out its fourth album with no title or indication on the cover of who the band was. The only title of the album was the four symbols the musicians adopted for themselves.

Consequently, the album has no real title–not Led Zeppelin nor Led Zeppelin IV nor Zoso, the title fans gave it after guitarist Jimmy Page's personal symbol.

The album peaked at Number Two on the Billboard 200, kept out of the Number One spot by Carole King's Tapestry. It spent 259 weeks on the chart, the longest stay of any Zeppelin album.

It has sold more than 22 million copies since its release.

The album entered the U.K. chart at Number One.