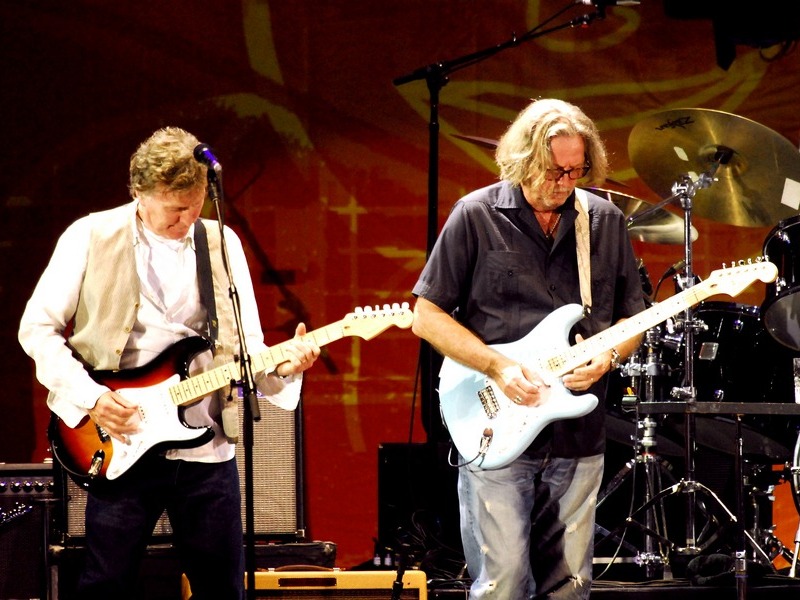 Happy Birthday to Steve Winwood who celebrates his 74th birthday today (May 12th)!!! Winwood surprised fans when he backed out of the opening slot to Steely Dan's spring tour with no reason offered. The keyboard legend recently contributed to Christine McVie's upcoming solo album, offering up piano and backing vocals to their co-write, “Ask Anybody.”

Last year Winwood teamed up with Santana for a cover of Procol Harum's “Whiter Shade Of Pale,” which was featured on the band's Blessings And Miracle collection

Steve Winwood has been a working musician nearly all of his life having joined the Spencer Davis Group band in 1963 at the age of 15. Two years later, the band released their debut album, titled Their First LP. Though Spencer Davis led the band, Winwood was the group's unmistakable star, and hits like “Gimme Some Lovin'” and “I'm A Man” established Winwood, then called “Little Stevie Winwood,” as one of the most popular singers in Britain, and was often referred to as the “white” Ray Charles.

In 1967, he quit the Spencer Davis Group to form the more experimental Traffic with former Spencer Davis Group roadie Dave Mason, Jim Capaldi and Chris Wood. The group released two albums before breaking up. Winwood then hooked up with former Cream members Eric Clapton and Ginger Baker, as well as former Family member Rick Gretch, to form the short-lived supergroup Blind Faith. That band lasted less than a year, after which Winwood reformed Traffic.

By 1977, Traffic had split again and Winwood kicked off a more pop-oriented solo career, racking up numerous hits over the next decade, with such songs as “While You See A Chance,” “Talking Back To The Night,” “Back In The High Life,” “Higher Love,” “The Finer Things,” “Valerie,” “Freedom Overspill” and “Roll With It,” among others.

In 2009, Winwood and Clapton released the deluxe CD/DVD Clapton & Winwood: Live From Madison Square Garden. The set, which features tracks recorded during the pair's two-date New York City stand in February 2008, includes such favorites from Blind Faith's first and last album, including “Had To Cry Today,” “Presence Of The Lord,” “Sleeping In The Ground” and “Well, All Right.”

The duo tore through the Clapton classics “Forever Man”, “Cocaine,” “Double Trouble” and “After Midnight” — along with such Winwood and Traffic favorites as “Dear Mr. Fantasy” “Glad,” and “Pearly Queen.”

In 2012, Winwood's second solo album, 1980's Arc Of A Diver, was given the deluxe reissue treatment including a second bonus disc including rare tracks, along with the BBC Radio 2 documentary entitled Arc Of A Diver: The Steve Winwood Story.

Eric Clapton, who left Cream to form Blind Faith with Steve Winwood, told us his desire to play with Winwood began during the Cream days: “If I'd had more power of personality and more authority, I would have insisted that we had a keyboard player, and I would've chosen Steve Winwood. I mean, it kept being a fantasy of mine that Steve would join Cream, but I just didn't feel confident enough to broach the subject. Maybe I did a couple of times, but I think I, maybe I was, it was discounted.”

Although Steve Winwood recently wrapped a sold-out solo theater tour, we asked him if he's at all worried that his solo gigs will be overlooked after becoming the go-to-guy opening act for such A-list peers as Rod Stewart, Santana, Tom Petty & The Heartbreakers, and last summer's run with Steely Dan: “It's interesting. Y'know, I think there's something to be said for both. And then of course before that I was out with the Tom Petty tour, which was a success. But I think it was . . . I think it worked in conjunction with my shows. I wouldn't like to think that that was the only thing I was doing. I still like the idea of doing my shows as well. So, I think it sort of broadens the view of my music, I should think.”

Steve Winwood explained to us that although he knows his setlists need to feature his classics with the Spencer Davis Group, Traffic, Blind Faith, not to mention on his own — that doesn't mean he has to turn into a traveling jukebox on the road: “Obviously when I play live shows, I'm expected to play a lot of things. I mean, if I don't play something from some particular era, I mean the (online) messages fly around, so there's a regular amount of things I generally have to play. So, what I've tried to do, and with the people in the various bands I've played (in), is we try to reinvent some of the songs that I'm known for and expected to play. Partly, it's more interesting to us and we hope it's more interesting to the listener.”