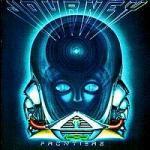 ‘Send Her My Love’ – Journey

The fourth single from Journey's Frontiers album, “Send Her My Love” reached Number 23 on the Billboard Hot 100.

A personal favorite of frontman Steve Perry's, the song was inspired by an encounter keyboardist Jonathan Cain had at a party, when someone mentioned the name of an old girlfriend. He told the person to “send her my love,” and the phrase stuck in his head.

The song was born when Cain played some chords for Perry during writing sessions for the Frontiers album. “He could magically weave a melody over anything I could play,” Cain said.

Frontiers reached Number Two on the Billboard 200 and sold more than five million copies. It was kept out of the Number One spot by Michael Jackson's Thriller.

The album reached Number Six in the U.K. to become Journey's most successful album there.

Frontiers was Journey's last album for three years, until 1986's Raised On Radio.