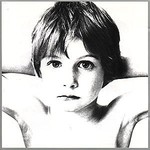 U2 formed in 1976 in North Dublin, Ireland. They first chose the name Feedback, then the Hype, before settling on the name of the famous American spy plane that crashed in the former Soviet Union.

“I Will Follow” was the first track on U2's debut album and was Boy's first single in both the U.S. and the U.K., though it didn't chart in either country.

U2 had already released an independent record in Ireland, featuring two songs recorded with British producer Martin Hannett. For Boy, however, the quartet enlisted local producer Steve Lillywhite, who became the band's chief collaborator during the early stages of their career.

For “I Will Follow,” Lillywhite and U2 retained the spartan arrangement the band had already worked up, with the addition of glockenspiel to sweeten the song's flavor.

The lyrics to “I Will Follow” focus on a young man coming of age and were partly inspired by the experiences of frontman Bono after his mother died when he was 14.

Although it took more than a year in each case, Boy reached Number 63 on the Billboard 200 and Number 52 in the U.K. The album was eventually certified platinum for sales of more than a million copies.