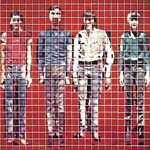 ‘Take Me To The River’ – Talking Heads

After Talking Heads established themselves on the vanguard of New Wave with their debut album, Talking Heads '77, the group's choice of an Al Green song to cover was a surprise.

Byrne said that there were three other covers of “Take Me To The River” out at roughly the same time — by Foghat, Bryan Ferry, and ex-Banddrummer Levon Helm. Byrne said, “More money for Mr. Green's Full Gospel Tabernacle Church, I suppose.”

Byrne described “Take Me To The River” as “A song that combines teenage lust with baptism. Not equates, you understand, but throws them in the same stew, at least. A potent blend. All praise the mighty spurtin' Jesus!”

The album More Songs About Buildings And Food hit Number 29 on the Billboard 200 and Number 21 in the U.K.

Talking Heads supported the album with their first world tour, hitting not only North America and Europe but also New Zealand, Australia, and Japan.