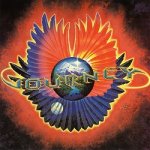 ‘Wheel In The Sky’ – Journey

“Wheel In The Sky” began as a poem by Journey bassist Ross Valory's wife Diane, which was titled “Wheels In My Mind.”

The lyrics were rewritten by Robert Fleischman, who was Journey's singer in the summer of 1977.

Fleischman was fired after management heard Steve Perry on a tape by Perry's band Alien Project. Perry made his debut with Journey on October 28th, 1977, at the final show of a three-night stand at San Francisco's Old Waldorf Theatre.

Guitarist Neal Schon wrote the melody for “Wheel In The Sky” on acoustic guitar while riding in the backseat of a station wagon between gigs in the summer of 1977.

The Infinity album hit Number 21 on the Billboard 200 chart and was Journey's first million-seller.

Journey had to switch studios during the Infinity sessions following a brawl at Master's Wheels in San Francisco. While celebrating a successful guitar solo, one of the band members poured beer over producer Roy Thomas Baker's head. Baker retaliated by spraying a fire extinguisher around the studio, blanketing the studio equipment with foam. The studio's owner retaliated by punching out Baker.

The Infinity cover was drawn by Stanley Mouse and Alton Kelley, who did many of the Grateful Dead's covers and many San Francisco concert posters.