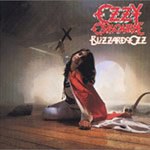 The group quickly repaired to the studio to record Osbourne's first solo album, Blizzard Of Ozz, which was released in the fall of 1980 in the U.K. and the following spring in the U.S.

Osbourne said the song “reflects everything I was going through at the time…The studio was rumored to be haunted by a poltergeist. Most days, we would wake up and windows would be smashed, crockery shattered, doors were broken off their hinges, and our clothes would be floating in the stream outside. The studio owner was insisting it was us getting drunk every night and tearing up the studio, but we stuck by our story that it was always the poltergeist.”

The Blizzard Of Ozz album reached Number Seven on the U.K. chart, then Number 21 on the Billboard 200. It's sold more than four million copies in the U.S.

As fans were going crazy for “Crazy Train,” Osbourne made his notorious May 1981 visit to Jet Records' corporate headquarters in New York City, where he bit the head off a dove in front of label executives.