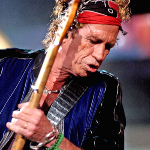 The Rolling Stones recorded “Mother's Little Helper” at the same sessions that produced “Paint It, Black,” “Lady Jane,” and other songs.

In his memoir Stone Alone, bassist Bill Wyman remembers the scene at RCA Studios and in Los Angeles at that time: “We loved this studio because it was custom-built: with no windows, we neither knew nor cared whether it was night or day but just kept playing on. As I arrived, two girls we had met in Phoenix were hanging around outside. I got them into the studio quietly and told them to strip and walk in on the boys to shock them, which they did. (Manager) Andrew (Loog Oldham) grabbed one and pulled her into the control room for 'action' in front of everyone.”

Released as a single only in the U.S., “Mother's Little Helper” peaked at Number Eight on the Billboard Hot 100.

The song's lyrics are an indictment of middle class prescription drug abuse as an antidote to the drudgery of everyday life. “What a drag it is getting old,” Mick Jagger sings.

Because this phenomenon was common amongst housewives, critics considered the song another example of the Stones' misogyny.