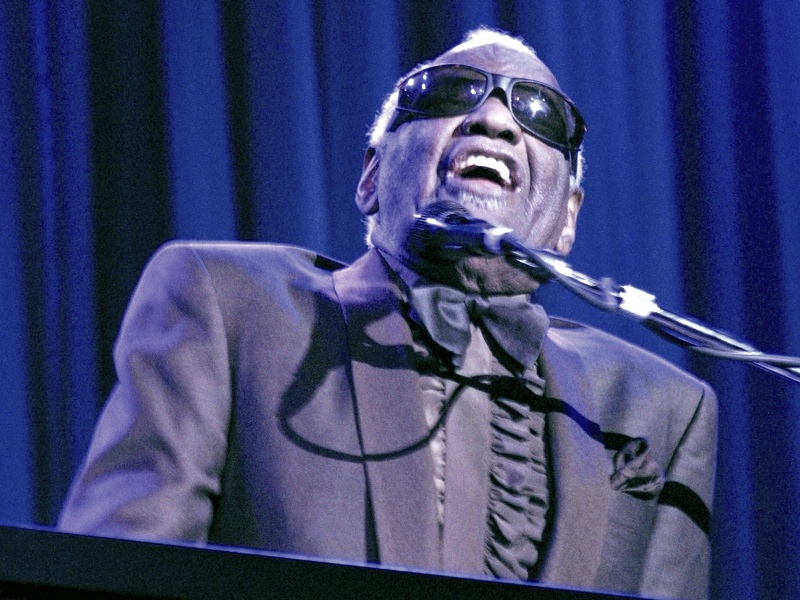 Today (June 10th) marks the 18th anniversary of the death of the great Ray Charles. Charles died of liver disease in his Beverly Hills home at the age of 73. His health had been in decline since the previous summer.

Charles, whose real name was Ray Charles Robinson, was born in Albany, Georgia, on September 23rd, 1930, and lost his sight to glaucoma at age seven. He is best remembered for bridging the gap between R&B and gospel, with jazz, country and pop. Some of Charles' biggest hits included "Hit The Road, Jack," "Here We Go Again," "I Can't Stop Loving You," "What I'd Say," "I Got A Woman," "America The Beautiful," and "Georgia On My Mind." Among his many other honors, Charles was one the first artists inducted into the Rock and Roll Hall of Fame in 1986.

Just prior his death, Ray Charles said that he planned on making music until he died: ["I'm a Duke Ellington, man. I'm a Count Basie. Y'see, because when music is your breathing or in your bloodstream, you don't retire from it. You go to your grave with it. I mean, that's just the way it is."] SOUNDCUE (:12 OC: . . . way it is)

Stevie Wonder, whose second album, 1962's Tribute To Uncle Ray, featured covers of Charles's hits, says that he feels confident that Ray Charles's legacy will live on: ["I do pain for knowing that, physically, Ray Charles has died. I joy in knowing that he has left such an incredibly great legacy behind that he will never, ever die. His music will never die, and I know that his legacy will outlive generations to come."] SOUNDCUE (:16 OC: . . . generations to come)

Billy Joel, who gave his daughter Alexa the middle name of Ray, in tribute to his idol, went on to duet with him on his 1986 classic "Baby Grand" from The Bridge. He said that “Brother Ray” was always a key vocal inspiration for him: ["Sometimes I’m trying to sound like Ray Charles . . . the funny thing is, I found out Robert Plant sings the way he did because he was trying to sing like Ray Charles and that’s as close as he could get.”] SOUNDCUE (:08 OC: . . . he could get)

Shortly before Charles' death, Quincy Jones reflected on his longtime friend and collaborator: ["We used to sit and dream about the future: 'We want to work with a symphony, we want to do this, we want to do films, we wanted to do this.' And we did it all, together, and that is very rare, y'know? 'Cause we used to sit and dream about it, and then we got off our butts and went out and did it. Y'know, 'In The Heat Of The Night,' 'Let The Good Times Roll,' 'One Mint Julep,' 'Bags,' 'We Are The World'. . . I forget, it just never stops, man! We did it all. It's really, really a blessing, to start that far back and still be. . . We still get together and crack each other up, man."] SOUNDCUE: (:32 OC: … other up, man.)

Shortly after Ray Charles' death, the posthumous album Genius Loves Company, featuring duets with Elton John, Michael McDonald and Willie Nelson, among others, went on to win eight Grammy Awards, including Best Album, and Best Record for his duet on that album's "Here We Go Again" with Norah Jones.

Michael McDonald remembers that even though Charles was ailing he gave their version of "Hey Girl" his fullest effort: ["We sang together live in the studio, which was a thrill. He wasn't feeling very well when we did it. He was unfortunately getting kind of sick then. But he was, y'know, always a pro, and he was always great, y'know?"] SOUNDCUE (:13 OC: . . . always great, y'know)

E Street Band guitarist Nils Lofgren told us that Ray Charles' work and influence can never be overstated — and admitted he was surprised that his death wasn't treated with a period of official National recognition: ["To me, he's one of my heroes, and I listen to him probably more consistently than any other artist. I'm just, like, 'Jeez, how come we're not, like, having that kind of moment for Ray that we do for some of our presidents?', and stuff like that. I honor him, I love him, I'm grateful, and I wouldn't be who I am without Ray Charles, nor would any of my peers. And they all know that, and I know it."] SOUNDCUE (:20 OC: . . . I know it)

In 2009 the 21-song anthology Genius: The Ultimate Ray Charles Collection was released. The collection includes such classic tracks as "I Got A Woman," "Busted," "Georgia On My Mind," "Hit The Road Jack," "I Can't Stop Loving You," and "America The Beautiful."

2010 saw the release of Rare Genius: The Undiscovered Masters — the latest posthumous collection from Charles. The set features previously unreleased tracks from "Brother Ray" recorded in the 1970's, '80s, and '90s — including long-forgotten and unheard duet with the great Johnny Cash.

Among the highlights on the disc is the 1981 recording of Kris Kristofferson's "Why Me, Lord?" which was only recently unearthed in the Sony Music vaults and originally intended for an unreleased project for CBS Records.