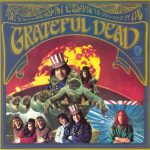 ‘Playing In The Band’ – The Grateful Dead

Though “Playing In The Band” was co-written by Grateful Dead drummer Mickey Hart, the song wasn't recorded until the live version on The Grateful Dead was set to tape in the spring of 1971 — after Hart had left the band for personal reasons.

With guitarist Bob Weir on lead vocals, the song quickly became one of the Grateful Dead's in-concert anthems and a fan favorite.

With other personnel problems — including the weakening condition of keyboardist Ron “Pigpen” McKernan — the Grateful Dead decided to follow its two most successful studio albums, Workingman's Dead and American Beauty, with a set of mostly new songs recorded live.

This Grateful Dead album has taken on several other titles over the years, including Skull And Roses, in reference to the cover art.

The Grateful Dead peaked at Number 25 on the Billboard 200 chart.

The Grateful Dead has long been one of the band's favorite albums. As singer-guitarist Jerry Garcia noted, “It's us, man. It's the prototype Grateful Dead, basic unit. Each one of those tracks is the total picture, a good example of what the Grateful Dead is musically… enough of an overview so people can see that we're a regular shoot-em-up saloon band.”

The Grateful Dead album also kicked off the formal start of the Deadhead movement, as the group began recruiting fans and establishing a fan club with the inside cover message: “DEAD FREAKS UNITE. Who are you? Where are you? How are you?” It asked fans to send information to the band's offices, attn: Dead Heads.