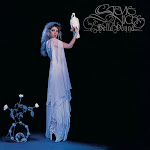 According to Nicks, “Edge Of Seventeen” was inspired by a visit with a sick uncle in Phoenix: “I sat at his bedside, while (his son) John sat on the floor beside him, and we stayed there. My father did not come, nor did my mother… nor my aunt… so I sat there and held his hand, and sometime right about sunset, he slightly turned his head to John, and then to me, and his hand slowly let go of mine. I did run out into the hallway, but no one was there… and the white-winged dove took flight.”

The title supposedly comes from Nicks asking Tom Petty's wife when they had met. His wife said, “At the age of seventeen,” but she had a very strong Southern accent; Nicks thought she said “the edge of seventeen,” and liked the sound of the phrase. (Wikipedia)

The Bella Donna album reached Number One on the Billboard 200 and Number 11 in the U.K.

The album has sold more than four million copies, and remains the best-selling of her six solo albums.

The album featured duets with Tom Petty and Don Henley.