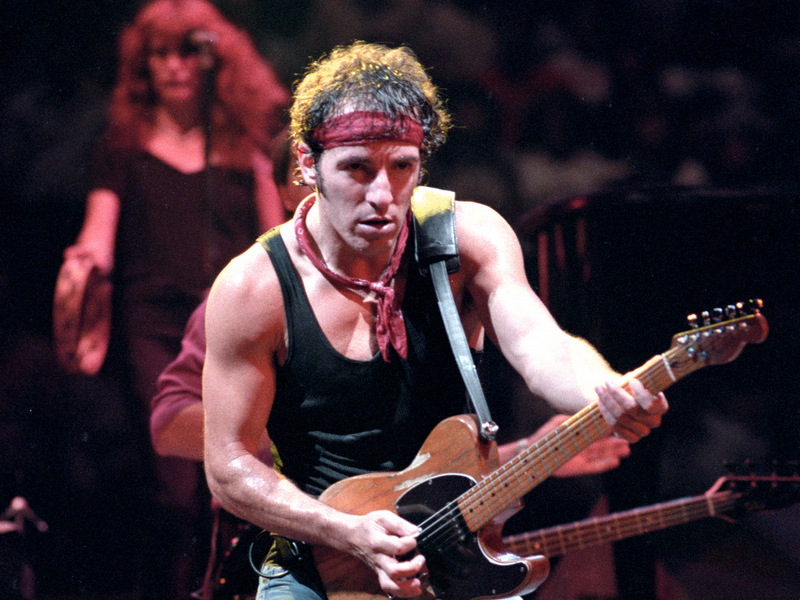 Flashback: Bruce Springsteen Kicks Off ‘Born In The U.S.A.’ Tour

It was 38 years ago tonight (June 29th, 1984) that Bruce Springsteen & The E Street Band launched their largest tour to date, kicking things off in June 29th, St. Paul, Minnesota's St. Paul Civic Center. The trek — which was the first to bring Springsteen to the largest stadiums around the road — featured the official tour debuts of new recruits, backing vocalist Patti Scialfa and Steve Van Zandt's replacement, guitarist Nils Lofgren. It was during opening night show that the iconic video for Born In The U.S.A.'s lead single — and biggest hit — “Dancing In The Dark” was filmed with actress Courtney Cox and directed by Brian De Palma.

The massive Born In The U.S.A. tour spanned four legs, playing a total of 156 shows: 122 shows in North America, eight in Australia, eight in Asia, and 18 in Europe before wrapping on October 2nd, 1985 during the final night of a four-show-stand at the Los Angeles Memorial Coliseum.

On June 4th, 1984 Born In The U.S.A. was released and less than three weeks later on June 23rd, the album debuted at Number Nine on the Billboard 200. It hit the Number One spot for the first of its seven-week run on July 7th.

Nils Lofgren, an old friend of Springsteen's by the time of the tour, told us that he was the first guitarist “The Boss” called for the position: “I was just blown away, y'know, when Bruce needed a guitarist. I’d stayed in touch with him all through the years, and I, I managed to get the first call and after two days jamming with the band, um. . . it felt good to all of 'em, and he asked me to join. It was just a gift from heaven.” SOIUNDCUE

Patti Scialfa — now “Mrs. Bruce Springsteen “– joined the E Street Band only days before the tour's opening night. She recalled being white-knuckled at being thrown in the deep end on such short notice: “It was overwhelming, because — I wanted to do it, I was excited about doing it; the overwhelming part was that I didn't have time to learn all the (laughs) material. So, I had to learn it in, y'know, a few days — and in front of people. I had to learn during the shows.”

Drummer Max Weinberg reflected on the era-defining 1984-1985 Born In The U.S.A. tour, which spanned the globe over the course of 156 shows: “The record was a big hit — the ('Dancing In The Dark') video had a lot to do with that. Suddenly, 75 percent of our audience at the concerts were guys — now, it was a preponderance of girls and women at our shows. And Bruce, certainly, turned into a video star; I'm not sure he altogether felt comfortable with that role, but we were on a tour and the tour took on a life of its own. We did about 170 shows all around the world. It was a fabulous experience because we had finally gotten to the place we always wanted to be — in terms of putting on a show, playing big places — it was quite a time.”

In recent years Springsteen has performed the Born In The U.S.A. album in its entirety a handful of times within his E Street Band shows.

So far, in his ongoing archive collection, Bruce Springsteen has released a total of five shows from the Born In The U.S.A tour — including three from the 1984 North American leg all from East Rutherford's Brendan Byrne Area on August 5th, 6th, and 20th; and two from '85 — August 22nd, 1985 at East Rutherford, New Jersey's Giants Stadium and September 27th at the Los Angeles Memorial Coliseum.