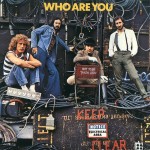 Three years had elapsed between Who By Numbers and Who Are You, the longest gap of time between any Who recordings up to that time. The time spent apart found the band members increasingly estranged from one another, especially singer-guitarist Pete Townshend, who was spiritually and creatively frustrated with the group. Lead singer Roger Daltrey was too pragmatic to worry about anything other than getting on with recording, bassistJohn Entwistle just wanted to work, and drummer Keith Moon was too sick with alcoholism to worry about much else.

Musically, Who Are You was a stretch of the Who's sound, with keyboards and synthesizers taking a more prominent role. The new sound was Townshend's way of trying to keep the group, which he felt was stagnating, fresh and vital, since the other members resisted any change.

Part of the album's lack of violent energy also stems from the fact that Moon was in poor health and wasn't playing up to snuff. In fact, on the one song that features a tricky rhythm, “The Music Must Change,” Moon doesn't play at all.

Had Moon not died within a month of the album's release, “Who Are You” would probably be viewed as a transitional work rather than the last great song the band recorded.

Ironically, Moon is pictured on the album cover seated in a chair that has the words “Not To Be Taken Away” on the back.

The lyrical inspiration for the song came to Townshend after a drunken night. During the night in question, his antics included accosting two members of the Sex Pistols in a bar and demanding to know why they were constantly chiding the Who in the press. The following dawn, a policeman saw Townshend sleeping in a doorway, recognized him, and let him go home.

The song entered the pop chart in November 1978, topping out at Number 14.

The B-side to the single was “Had Enough.”