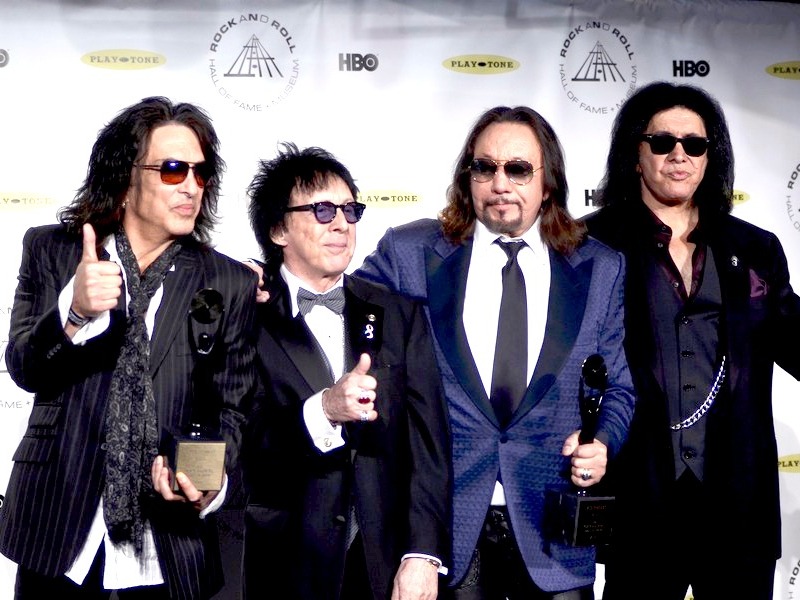 As Kiss carries on with its ongoing farewell tour, Gene Simmons maintains that Ace Frehley and Peter Criss' absence is of their own doing. During a chat with Chaoszine, Simmons was pressed about the band's two co-founders staying away from the reunion trek in any capacity: “We’ve tried. I keep trying. Paul (Stanley) and I met with Ace. Tried to convince him to come back. He said, 'I want this, I want that, I want that.' (We said) 'Well, we can’t do that.' I asked Ace and Peter to be in the (Kisstory) documentary. They said no. They might do it if they have complete control of the edit. Well, I said, 'You can’t do that because even we don’t have that. But I won’t control what you say. You can say whatever you want.' The answer is no, both of them. I asked Ace and Peter, 'Come out on tour. We’ll get you your own room and everything. Come out on the encores.' Ace said, 'No. The only way I’d come out is if I’m the Spaceman and you ask Tommy (Thayer) to leave.' I go, 'Well, that’s not going to happen.' First of all, I care about Ace, but he’s not in shape. He can’t play that way and doesn’t have the physical stamina to do that.”

Simmons went on to explain how he feels about Frehley and Criss — but couldn't help but remain logical in not wanting history to repeat itself: “Look, we care about them. We started this thing together, and they were equally important to the beginning of the band with Paul and I. No question. But as time went on, not everybody is designed to run a marathon. Some people are designed to be in a band for a year or two, a few years, and then that’s all they can do. And both of them have been in the band three different times. How many chances in life do you get?. . . The answer is, the door is always open.”

He added: “If they want to jump on stage at any time and do the encores with us, terrific. But no, we’re not going to get rid of Tommy or Eric. In fact, Tommy and Eric (Singer) are the best things that happened to us. They gave us new life, new appreciation for what we do because they were fans first. And every once in a while, Eric or Tommy will turn around and say, 'Wow, isn’t this great?' And it makes us realize, 'Yeah. Wow, isn’t this great?'”

Simmons also intimated that personal issues aren't the only ones keeping his former-bandmates from joining up: “When I called to invite Peter to be in the documentary, his health isn’t what it should be. I don’t want to get too specific because it’s part of his private life. But no, physically, he wouldn’t be able to do it. Neither would Ace.”

Last year, while chatting on SiriusXM's Jim & Sam Show, Paul Stanley laid out why the third time with Frehley and Criss would absolutely not prove to be “the charm”: “You may want mom and dad to be back together — but it didn't work out. We had amazing moments and amazing times, and we did some phenomenal things together, which tie me to them forever. But that's not the fairytale; it doesn't end there. It's great to look back on, but you go back and it's not the same anymore. And you quickly realize — as we did — why it didn't work out the first time. That's why it didn't work out the second time.”