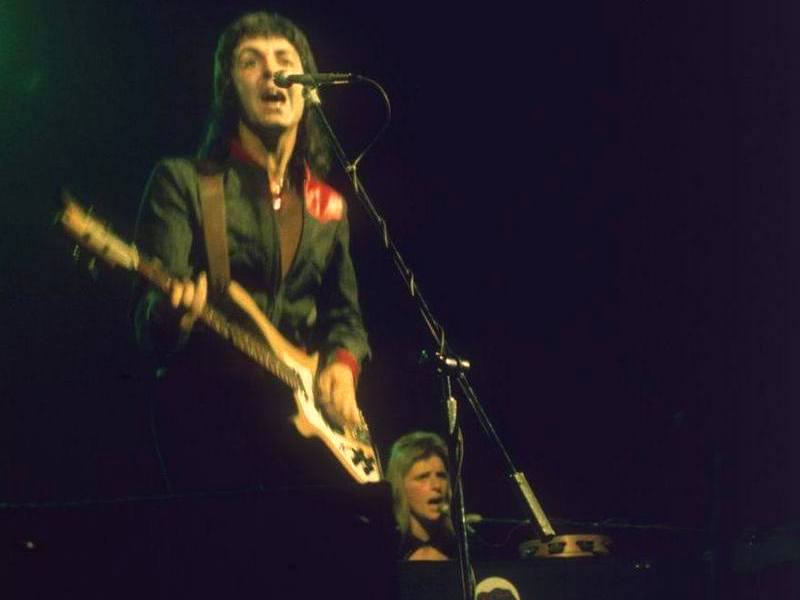 It was 49 years ago Sunday night (July 10th, 1973) that the original lineup of Paul McCartney's solo band Wings played their 58th and final show in Newcastle, England. The show was recorded by McCartney and briefly considered to be released as Wings' first live album and followup to their recent chart-topper, Red Rose Speedway. An acetate of the show at Newcastle City Hall was pressed by Apple Records and has since made the rounds on the bootleg and collectors circles.

The concert, which featured McCartney on bass and keyboards, also included wife Linda on keyboards, Denny Laine on rhythm guitar, bass and keyboards — and the soon departed Denny Seiwell on drums and Henry McCullough on lead guitar. McCullough joined Wings just prior to their first shows in January 1972, not long after Wings' 1971 debut album, Wild Life. Both McCullough and Seiwell would regroup with Wings on McCartney's Scottish farm later in July 1973 to rehearse the material for the Band On The Run album, but both left abruptly before sessions began in Lagos, Nigeria.

Shortly before his death in 2016 at age 72, Henry McCullough told us that adding in the fact that he was treated at times as nothing more than a session player for McCartney, the deal was bound to go sour as quickly as it did: “I went into the band not to be a sideman. Once the whole thing. . . We grasped what we were headin' for, it was heads down and everyone worked towards that particular goal — and it wasn't for very long. But there was sort of revolution in the air. And Denny Seiwell was startin' to feel it a little bit. And all we wanted was to be paid for what we were doin'. I didn't want to be on a weekly wage.”

Wings' original drummer Denny Seiwell, who co-founded the band with Paul and Linda McCartney, recalls the early days of Wings as an incredible time: “We were family. Y'know we'd hang together, travel together, the only thing that was different was he was the boss. Well, he was paying us. We were all on a small retainer fee. He was trying to set up a business in London. Sometimes the checks didn't come, but we were a family — but he was the dad.”

Seiwell, who began playing with McCartney in late 1970 during the Ram sessions, was actually the first member McCartney lined up for Wings. Seiwell admitted that the bottom line was that money was so scarce, he couldn't afford to stay with band: “I was waiting for some stuff to come along so we'd have some more binding legal agreements before entering into. . . I knew this record was gonna be a big one, and when none of that stuff was being taken care of, I just thought it was time to move on.”

Wings co-founder Denny Laine told us that he had no idea that the pair had quit until he didn't see them on the plane to Africa: “I didn't find out until they didn't turn up, because nobody told me what was going on. I just got the vibe. I knew that Denny was missing America, for example. I knew that he didn't like to travel. Y'know, he was basically a session man who got talked into going on the road.”

Paul McCartney recalled the circumstances leading up to Wings' departure to Lagos to record the album: “I was looking around for somewhere exciting to record the next album. So what I did, I thought, a good idea would be to get a list off EMI — our record company — of all the studios they had 'round the world. It turned out they had one in Africa. We just said, 'Yeah. Let's go to Africa.' The night before we were due to go Denny and Henry rang up and said, 'Um, we're not coming. We're not coming to Africa. We don't wanna come. We're leaving the band.' Oh, great, thank you! At first it was like, 'Oh no, tragedy!' But then, I just thought, 'Right, we're gonna go and we're gonna show you — we're gonna make the best album we've ever made!”

McCartney mended fences with Denny Seiwell and Henry McCullough over the years, with Seiwell supplying rare and invaluable footage to McCartney for his Wingspan documentary and ongoing “Archive Series.”

Prior to his 2009 Dublin show, McCartney and McCullough sat down for the first time since McCullough's departure. That night McCartney name-checked him from the stage prior to “My Love” — which featured McCullough's signature solo.

Recently released as part of the sprawling Paul McCartney And Wings – 1971-73 Limited Edition Box Set, which features both the new Wild Life and Red Rose Speedway “Archival Series” collections combined, Wings Over Europe spotlights the earliest live incarnation of Wings. All but one of the disc's 20 songs is from the band's summer '72 European trek, with the album's opening number “Big Barn Bed” coming from the July 10th, 1973 final gig in Newcastle, England.