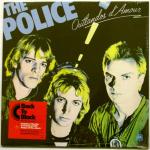 The U.S. got its first glimpse of the Police in a Wrigley's Chewing Gum commercial in February 1978, in which the group bleached its hair blonde. The blonde tresses got the more pop-oriented band mistaken as part of the punk explosion.

Among the group's first U.K. performances was an opening slot for '60s band Spirit in March 1978.

The reggae tinged "Roxanne," singer-bassist Sting's ode to a hooker, was first released in the U.K. in April 1978. It failed to chart.

It wasn't until the full album's release five months later that the song began to garner any real notice, eventually peaking on the Billboard Hot 100 chart at Number 32.

"Roxanne" was featured in the 1982 movie 48 Hrs. when jailbird Eddie Murphy loudly squawked the chorus while listening to the song on his Walkman.