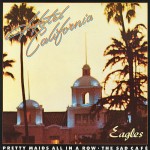 The fourth of the Eagles's five Number One singles, “Hotel California” stayed in the top 40 of the Billboard chart for 15 weeks, the longest of any Eagles song.

After four generally optimistic, sunny albums, this tour of the dark underbelly of the peaceful, easy California lifestyle signaled a new outlook for the group, continued on one of the other hits from the Hotel California album, “Life In The Fast Lane.”

Singer-drummer Don Henley said of the song, “I was a little disappointed with how the record was taken, because I meant it in a much broader sense than a commentary about California. I was simply using California as a microcosm for the rest of America and for the self-indulgence of our entire culture. It was, to a certain extent, about California, about the excesses out here. But in many instances, as California goes, so goes the nation. Things simply happen out here or in New York first…and then work their way toward the middle of America. And that's what I was trying to get at.”

The song's closing guitar jam announced Joe Walsh's presence in the group to the world. He joined in 1976, replacing original member Bernie Leadon.

In 1984, singer-guitarist Glenn Frey said, “We had Don Henley to sing the rock 'n' roll songs, why should I screw around with it at all? I loved the way he sings – he reminds me of (Bob) Seger, Wilson Pickett, the real thing. I think emphasizing his voice really helped push us over the top.”

About Henley's songwriting contribution, Frey said, “He was the lyrical genius, the English Literature major who could help us put these stories together.”