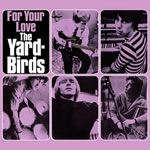 For Your Love – The Yardbirds

The Yardbirds formed in 1965, primarily as a blues outfit playing songs made famous by Sonny Boy Williamson and others.

The group chose its name from a reference in a Jack Kerouac book.

Eric Clapton was not an original Yardbird. He replaced Tony Topham, who during the fall of 1963 opted to attend college instead of pursue music as a career.

“For Your Love,” written by future 10cc member Graham Gouldman, was the Yardbirds' third single and its first big hit, rising to Number Six on the Billboard Top 100 and Number 3 on the U.K. chart.

Clapton, unhappy with the more polished, commercial direction that was signaled with “For Your Love,” left the band in March of 1965 to join John Mayall's Bluesbreakers and was replaced by Jeff Beck.

The For Your Love album reached Number 96 on the Billboard Top 200.