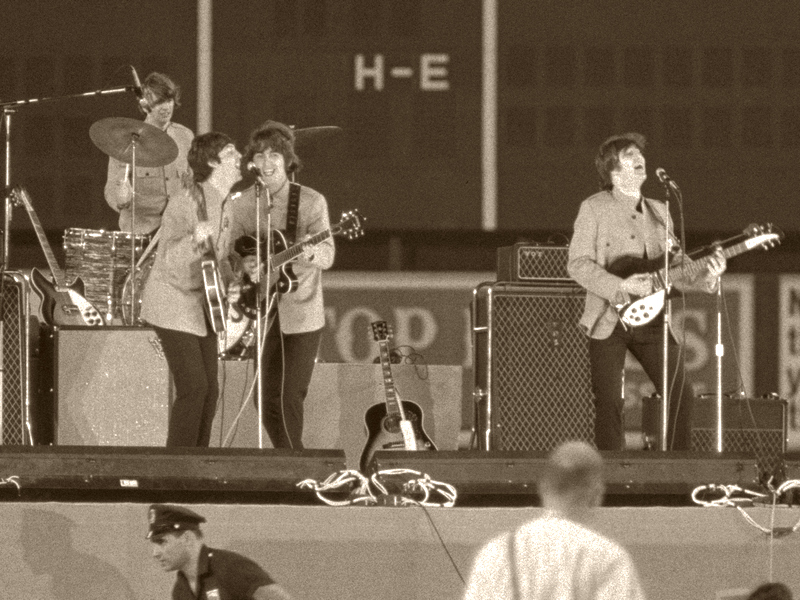 It was 57 years ago tonight (August 15th, 1965) that the Beatles played their legendary concert at Shea Stadium in New York City. The show was the first on their 1965 U.S. summer tour, and it was also the first-ever open-air stadium rock concert. The group flew into New York on August 13th and a day later taped a five-song performance for The Ed Sullivan Show to be broadcast the following month. Sullivan returned the favor by introducing the group the next night at Shea, in front of a sell-out crowd of 55,600 fans.

The Beatles, who performed on a makeshift stage near where second base would normally be, earned a whopping $160,000 for their 30-minute set — which was a record payout at that time. The New York Police Department was worried that fans attending the shows would jam the tunnels in and out of Manhattan, so the Beatles were escorted from the Warwick Hotel to the Manhattan East River Heliport and flown by helicopter to the roof of the World's Fair building in Flushing Meadows Park, not far from Shea Stadium. Next, the group jumped in a Wells Fargo armored van and were driven to the stadium. The van driver gave each of the Beatles a Wells Fargo “agent badge,” which they all wore at the evening's concert.

Unlike today's stadium events, no seats were set up on the field for safety reasons. Throughout the concert — which also featured legendary New York DJ Murray The K and opening acts the King Curtis Band, Cannibal & the Headhunters, Brenda Holloway, and Sounds Incorporated — fans were constantly stopped from making mad dashes towards the stage.

Ringo Starr recalled the concert in The Beatles Anthology, saying, “What I remember most about the concert was that we were so far away from the audience. . . And screaming had become the thing to do. . . Everybody screamed. If you look at the footage, you can see how we reacted to the place. It was very big and very strange.”

John Lennon recalled the show in 1970, saying, “At Shea Stadium, I saw the top of the mountain.” During his last full-length TV interview in April 1975, Lennon told Tomorrow Show host Tom Snyder that the entire “Beatlemania” era was as confusing and disconcerting to the group as one would imagine: “It was like being in the eye of a hurricane, and you thought — 'What's going on?' That was about as deep as it got: 'What is happening?' You'd suddenly wake up in the middle of one — a concert or a happening — and (think) 'How did I get here? Last thing I remember was playing music in a club and the next minute this.”

Singer Bobby Vinton and the Rolling Stones briefly visited with the Beatles before they hit the stage. Vinton remembers hanging out with the Stones as they made their way to the concert: “Well, I remember I went to see the Beatles at Shea Stadium when they were here. I still saw the poster, I think it was like five dollars to see the Beatles at Shea Stadium. I went with Mick Jagger and the Stones, and they didn't quite. . . they weren't there yet, y'know? They were just comin', and I remember walkin' in New York to Shea Stadium and a couple of guys noticed Mick Jagger and they start punchin' him. And, I mean, these guys in New York are kinda rough, and I said, 'Oh yeah, those bad guys from England.' (laughs).”

Legendary concert promoter, the late-Sid Bernstein, booked the “Fab Four's” 1964 Carnegie Hall shows and 1965 and 1966 Shea Stadium concerts. Rather than play Madison Square Garden — as had been suggested — making Shea Stadium a massive concert event was Bernstein's vision: “It was the first stadium concert. And it broke all records for gross — that record remained for awhile.”

Bernstein said that decades after event, people still talked about that Beatles concert on August 15th, 1965: “I even meet people today, who occasionally say, 'I saw the show at Shea Stadium.' And I ask, 'Which one?' And they say, 'Y'know, the '65 — the first one.' And I'll say, 'Did you hear anything?' And everybody will say, 'Didn't matter — I was there.'”

Eric Carmen told us that although primitive by today's big budget concert productions, the Beatles' performances during their touring years were defined by the quality of the material they performed: “Y'know, pacing was probably never a problem for the Beatles. Because first of all, all those songs were just terrific. They were playing for a half an hour. So, I mean if you listen to an old Beatle tape of a concert, it's 30 minutes of 'Twist And Shout' and 'I Saw Her Standing There,' and 'Ticket To Ride.' And how bad can it be?”

Beatlefan executive editor Al Sussman explained that only two-and-a-half years after first landing on American shores, the Beatles were so massive on a cultural level that they easily dwarfed even the strongest of their competitors with their talent, status, and popularity: “As big as Herman's Hermits were during '65, as big as the (Rolling) Stones were, it was so obvious that the Beatles were on a totally different level popularity-wise. It was like, they're up here — and the Stones and the Beach Boys, and everyone else are down here.”

The show was filmed and eventually aired on U.S. TV in December 1966 as The Beatles At Shea Stadium. Although most of the footage from the show is featured in the group's Anthology series, nearly all of the behind-the-scenes footage from that day remains unreleased. The Beatles returned to Shea the next year, on August 23rd, 1966, to a less-than-capacity crowd, with as many as 15,000 seats going unsold.

Both Paul McCartney's and Ringo Starr's future wives — the late Linda McCartney and Barbara Bach — were present at the concert. McCartney said during The Beatles' Anthology that, “Linda was also there — but as she was a real music fan she was quite (annoyed) with everyone screaming. I think she enjoyed the experience, but she genuinely wanted to hear the show. That wasn't the deal though. Not then.” Also on hand was Ringo's future brother-in-law, Joe Walsh.

On August 13th, 1965 the same day the Beatles landed in the States to kick-off their second full-scale North American tour, Capitol Records released the Help! soundtrack, which featured the seven songs featured in the group’s hit film. The U.S. version of the album was padded out by incidental music by composer Ken Thorne, but in the UK the Help! album featured another full side of music which went on to break a whole new set of musical boundaries. Author and historian Bruce Spizer spoke about the difference between the UK and U.S. editions of Help!: “Help! is a very interesting album when you take the British album. Because, what people don’t realize is that the focus when it was released in England was all these great songs from true film and the movie was out and on Side Two, you had ‘I’ve Just Seen A Face,’ which had gone kinda unnoticed. ‘Yesterday,’ which wasn’t given prominence, whereas when Capitol released ‘Yesterday’ as a single, y’know, it, became a million seller, Number One.”

In addition to the Beatles, other artists who have performed at Shea Stadium include the Rolling Stones, the Who, Eric Clapton, Elton John, the Police, the Clash, Simon & Garfunkel, Humble Pie, Grand Funk Railroad, Jimi Hendrix, Janis Joplin, Jethro Tull, Bruce Springsteen and the E Street Band, and Bob Dylan.

In July 2008, McCartney joined Billy Joel onstage during the final concert at Shea before the stadium was leveled. McCartney — playing the same Hofner violin bass that he did during the Beatles' 1965 and '66 shows — performed “I Saw Her Standing There” and then took over piano duties from Joel for “Let It Be” — marking it as the final song to be played in concert at Shea Stadium.

Joel paid tribute to the Beatles numerous times over his 2008 two-night stint dubbed, “The Last Play At Shea” — including wearing Ringo Starr's Wells Fargo agent badge that he had worn during their 1965 show.

On July 17th, 2009 Billy Joel returned the favor during the opening night of McCartney's three-night-stand at the New York Mets' new home Citi Field by joining in on “I Saw Her Standing There.” During his three-night run, McCartney paid homage to the “Fab Four's” 1965 gig by playing the band's original Shea closer “I'm Down” all three nights.

On July 16th, 2011, McCartney and Billy carried on the tradition by jamming on “I Saw Her Standing There” at McCartney's third venue-opening gig at New York City's other Major League Baseball arena — Yankee Stadium.

Although Paul McCartney understands that the Beatles, and more importantly, the music he and John Lennon wrote, defined the times they lived in, he remains the first to share the credit of the 1960's artistic renaissance with the many others at the forefront of the changing times: “We changed a lot. I don't think we did it. I think we were spokesmen for a lot of people. People used to say, 'What about the haircut, and stuff? Oh, you invented that!' We said, 'No, no, there was this bloke called Jurgen (Vollmer).' There was always someone who turned us on, and followed it and thought, this is a really good idea, we'll bring that into the mainstream. But we weren't necessarily the inventors of it all. I mean, there were millions of art students and students coming up when we came up who were as bright as we were, what. . . it showed! In the fashion industry, and in plays, in literature, and book writing. It was a generation, and I think it was the war thing — the baby boom thing. But yeah, without the Beatles, it would've been a very different world, I think.”

In 2016, the Beatles' 1965 Shea Stadium concert was shown during the screenings of Ron Howard's documentary, The Beatles: Eight Days A Week – The Touring Years — although to Beatles fans' disbelief, the entire concert still eludes official release.