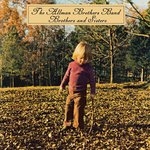 Brothers And Sisters was the Allman Brothers Band‘s first album following the death of co-founder and guitarist Duane Allman in a motorcycle accident on October 29, 1971.

Rather than try to force another guitarist to step into Duane's formidable shoes, the Allmans recruited a keyboard player, Chuck Leavell.

“Ramblin' Man” had already been recorded when bassist Berry Oakley died in another motorcycle accident on November 11, 1972. Lamar Williams replaced him.

Singer-guitarist Dickey Betts had shown “Ramblin' Man” to Duane Allman on acoustic guitar in 1970. Back then they referred to it as the “ramblin' country man” song.

“Ramblin’ Man” was the biggest hit the Allmans ever had, peaking at Number Two on the Billboard Hot 100 singles chart in 1973.

Drummer Butch Trucks says that the song remains one of his favorites. “That's just a fun one. I remember Dickey writing it back in, I guess 1970, sitting around the big house in Macon. When he first brought it to the band, his feeling was it was just too country, but we all knew it was a good song.”

Trucks says the group actually worked on it as a demo for a song they were going to submit to country star Merle Haggard. “We actually went to the studio in Macon to record a demo to send to Merle Haggard or someone like that to see if they wanted to record it. We got in the studio and started playing it, and one thing led to another and it wound up turning into this thing that is our one big hit, I guess.”

Betts' lead guitar work – assisted by studio guitarist Les Dudek – took some of the pressure off the Allmans, convincing fans that he could help fill the void created by Duane's death.