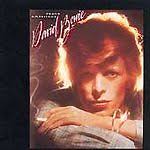 “Fame” — David Bowie's bitter essay on the perils of celebrity (“Fame/What you get is no tomorrow”) — was his first Number One hit in the U.S., spending two weeks in that position.

It was also his first single to place higher than Number 28 on the Billboard Hot 100 chart.

This spontaneous recording collaboration between Bowie and John Lennon yielded two songs — “Fame” and a cover of the Beatles' “Across The Universe.”

During the session, Lennon reportedly gave Bowie advice on sorting out some management problems he was having. Bowie has continued to credit Lennon's observations for helping him get his career in good order.

The Bowie/Lennon session occurred after the initial recording for the Young Americans album was completed. Not entirely happy with the results producer Tony Visconti had accomplished, Bowie went back in and was in the process of reworking the tapes when Lennon dropped by the studio.

Guitarist Carlos Alomar actually created the “Fame” riff for a cover of the Flare song “Footstompin',” which Bowie was also working on.

With its spare R&B stance, Young Americans was viewed as one of Bowie's many stylistic departures.

Propelled by “Fame,” the album peaked at Number Nine on the Billboard 200 and scored a gold album.