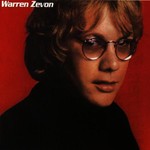 Prior to the success of “Werewolves Of London,” Warren Zevon was best-known as a songwriter whose work had been recorded by others, particularly Linda Rondstadt (“Hasten Down the Wind,” “Poor Poor Pitiful Me,” “Mohammed's Radio”).

“Werewolves Of London” hit Number 21 on the pop chart and jump-started Zevon's commercial career until he soon began battling with well-publicized alcohol problems.

The early commercial success raised expectations for Zevon among record companies. Though he has made several comebacks, none of his hits have sold as many copies or charted as high as “Werewolves Of London.”

Zevon, from 1996 liner notes: “Phil Everly said, 'I'm making another solo album. Why don't you guys write a song for me – a dance song. Call it 'Werewolves Of London.' I was at LeRoy (P. Marinell)'s house a few days later and he was playing that little V-IV-I figure when Waddy (Wachtel) walked in. 'What are you doing?' he asked, and we answered, 'We're doing the “Werewolves Of London.”' Waddy said, 'You mean, “Ahhooo” – those “Werewolves Of London?”