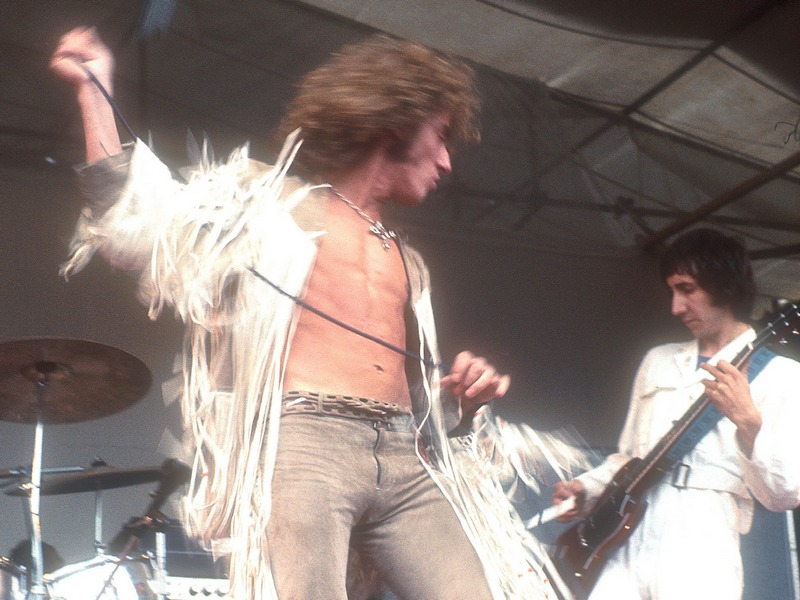 Flashback: The Who Releases ‘Who’s Next’ In America

It was 51 years ago today (August 25th, 1971) that the Who released what is largely regarded as their masterpiece, Who's Next. Although Who's Next, which dropped 11 days earlier in the UK, was a massive success, building on the back-to-back triumphs of 1969's Tommy and 1970's concert set, Live At Leeds; Who's Next only got as high as Number Four in the U.S. — yet fared better in the UK where it topped the album charts.

Who's Next, which is one of the rare albums in rock history in which every track became an FM staple, featured, arguably, the band's three most important '70s classics — with the Pete Townshend-written “Baba O'Riley,” “Behind Blue Eyes,” and the epic “Won't Get Fooled Again.” The album also featured John Entwistle's signature concert spotlight, “My Wife,” and such groundbreaking work as Townshend's “Bargain,” “Song Is Over,” “Going Mobile,” “Love Ain't For Keeping,” and “Getting In Tune.”

The album's genesis began as the dust settled on the original Tommy album and tour. Pete Townshend's 1970 songs were to be utilized in a futuristic multimedia project called Lifehouse. By the time the songs were released on Who’s Next, the project had been scaled back dramatically – but the songs, regardless of their story – were immediately embraced by fans as Who masterpieces.

Lifehouse, which had huge Orwellian undertones, was based around Townshend's tale of society existing in pods which are controlled by an evil government that uses an Internet-like power grid to brainwash people and dupe them into thinking the experiences they go through are actually life. A revolution ensues before the masses are eventually freed as the humans become attuned to a single note of music.

On June 25th, 1971, a significantly edited version of “Won't Get Fooled Again” was served up as the lead single to Who's Next, peaking at Number 14 Stateside and at Number Nine in England. “Behind Blue Eyes” finally saw a single release in October and topped out at Number 34 on the Billboard Hot 100. Prior to that, in October, the Who released “Let's See Action” as a single in the UK. Although recorded during the Who's Next sessions, it was left off the album. Despite that, it went on to peak at Number 16 on the charts.

Among the other outtakes from the Lifehouse project which have gone on to become Who classics in their own right are “Join Together,” “Too Much Of Anything,” “Relay,” “Time Is Passing,” and “Pure And Easy.” On December 5th, 1999, Townshend presented Lifehouse as a solo radio play on Britain's BBC Radio 3, which incorporated all the 1970-1971 songs — and them some — together at last.

Like he had done for Tommy, Pete Townshend recorded one-man-band versions of all the Lifehouse songs for the Who to use as sonic blueprints for the actual sessions. Townshend admitted to us that his heart and soul can always be found in his home demos as opposed to the Who's proper studio recordings of his songs: “I put more energy and more passion and more intensity in the recordings that I made at home of the songs that I was writing than I would put into the recording studio sessions with the band — which seemed to me to be mainly, kind of boozy evenings with the lads talking about, y'know, what they've done the year before, y'know? And there's a line in Quadrophenia — 'You remember that hotel where the doors we smashed.' It was all about that kind of thing. And we would sit in the studio and the actual recording would interrupt the reminiscences.”

Out now is Richie Unterberger's book, Won't Get Fooled Again: The Who From 'Lifehouse' To 'Quadrophenia.' Unterberger, known for his critically acclaimed recent work on the Beatles and the Velvet Underground, breaks new ground in covering the back story on how Townshend and the unrealized multimedia Lifehouse project became Who's Next. Unterberger feels that by the Who shedding “second-tier” Lifehouse material — such as “Join Together,” “Relay,” and “Let's See Action” — Townshend ultimately made Who's Next stronger: “Let's say that it was not marketed as a concept album, that he and Glyn Johns and the rest of the Who decided that these songs, we're not going to make a film out of it, we're not going to market it or talk it up as a story or a concept album — but they're good enough songs that we can put them together the way that the Beatles put together the “White Album” or like the (Rolling) Stones put together Exile On Main Street — I think it would've been perceived as a letdown.”

The guitar sound for much of Who's Next can be attributed to Pete Townshend's then-newly acquired Gretsch 6120 — a gift from friend and fellow guitarist, Joe Walsh. Walsh recalled to us how the James Gang opening for the Who led to a longstanding friendship with Pete Townshend and a European tour for the band: “And just one of those gigs where Townshend decided to show up a little early. He checked out us onstage and, y'know, they're pretty much three-piece — three-piece and Roger Daltrey. Well, he and I are on kind of the same wavelength; y'have to be in a three-piece band. It's a style we call, I guess 'lead-rhythm guitar.' And they were looking for someone to open for them in Europe and we got invited along to open for the Who on the Tommy tour of Europe.”

Pete Townshend told us that although “Baba O'Riley” has been a radio and concert staple for the band for decades, most of the Who's fans still don't have a clue what the song is really about: “'Baba O'Riley,' y'know that song was meant to be the opening music, the back story to the movie that was going to be Lifehouse. So, it's not about getting wasted, it's about the fact that we, at that time, back in those days, we seemed to as a society (to) have our way of giving our young people a sense of value.”

Back in 2000, after Pete Townshend revamped Lifehouse as a live performance piece, Roger Daltrey told us that he’s pleased that Townshend, who always regarded Lifehouse as something of an albatross, has finally been able to bring the project to the public: “The music is great, which I knew anyway. . . I’m still out on the narrative, ’cause that was always the problem we had getting our heads around, was the narrative. . . Oh, just really pleased for Pete, yeah.”

Pete Townshend told us that he makes no apologies for veering away from rock music to dabble in theater, films and novels: “Y'know, some of those people that still to this day regard me as being pretentious because I aspire to live my life as an artist rather than a 'cash is king' rock n' roll performer. If that's pretentious, so be it.”