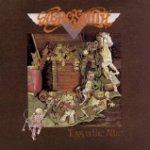 Since day one, Aerosmith has suffered critics' claims that the band was nothing more than second-rate Rolling Stones imitators. Lead singer Steven Tyler's ample lips, more often than not, were the foundation of the Mick Jagger jibes. And Tyler is not one to forget: “The critics saw the lips, and they thought Mick. That's all those beanbags wrote about us. But there was a lot more to us than that.”

Where the band did bear resemblance to the Stones was its surly attitude, particularly Tyler and ever-aloof lead guitarist Joe Perry.

Such insolence made for major success with “Sweet Emotion.” Tyler's angry swagger helped push the song, as well as the Toys In The Attic album, to platinum status. The band’s first two albums went gold, as well.

Much of the anger in the song was directed to Perry's then-wife. Tyler says of his turbulent relationship with the guitarist: “To this day, he wears a load of armor, but the music was always the saving grace. And if that's they way he chooses to let me in, that's fine. I just need to keep to keep coming up with my own passwords to get in there.”

The less vocal Tom Hamilton says of his part in the song's inception during the recording of Toys In The Attic:' “We had an extra day at the end… this one made it at the last minute. It’s still a song I'm very proud of.”

What he should be proud of is that it's one of the only tunes to use a voice-box that's still heard regularly on the radio today.