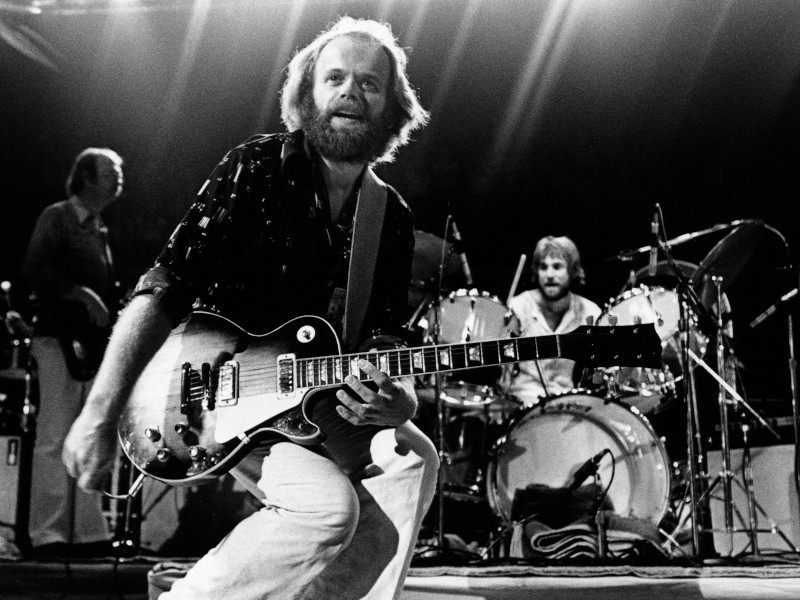 
Happy Birthday to Beach Boys co-founder Al Jardine, who turns 80 on Sunday (September 3rd)!!! Jardine now permanently tours with Brian Wilson's band, which features fellow Beach Boy Blondie Chaplin. In recent years, Jardine has been receiving raves for his string of acoustic solo dates, dubbed “A Postcard From California – From The Very First Song.” Jardine, who's joined by his son Matt Jardine on vocals and keyboardist Debbie Shair, weaves the group's key songs while chatting onstage about the history of the group. In addition to major hits such as “Surfin' Safari,” “I Get Around,” “California Girls,” and “Good Vibrations.” During the shows, Jardine thrilled longtime fans with such deep cuts as “Lookin' At Tomorrow (A Welfare Song),” and the first performance of his 1980 fan favorite “Santa Ana Winds” in nearly 40 years.

Jardine also divvies his road dates between his his Endless Summer Band and his group Family & Friends featuring Carnie & Wendy Wilson plus his son Matt.

Jardine began singing with Brian Wilson while the pair were high school football teammates at Hawthorne High School in Southern, California. Jardine played a major role in securing the session for the group's 1961 debut single “Surfin'” on which he sang and played double bass.

Despite all his accolades over the years, Al Jardine will always be best remembered for singing lead on the Beach Boys' second Number One hit, 1965's “Help Me, Rhonda.” Jardine recalled the recording session for the song: “Oh, I was delighted. I was honored. But the pressure (laughs), the pressure on me was enormous! Everybody in the band — everybody was there listening. But I was honored. I was really thrilled to have that opportunity.”

In February 2014, Jardine performed a rare unplugged solo show at Manhattan's Rubin Museum of Art with Chaplin appearing as a special guest. The concert, which was billed as Transcendental Music At The Rubin, was in benefit of The Rubin Museum of Art and the David Lynch Foundation, which sponsors TM studies. Jardine thrilled die-hard by playing such Beach Boys deep cuts as “Wake The World,” “Cabinessence,” “At My Window,” and “Transcendental Meditation,” among others.

In June 2013, Al Jardine teamed up with Sean Lennon to record a new, mainly a cappella rendition of John Lennon and Yoko Ono's global peace anthem, “Give Peace A Chance.” The video was among the many works projected on the side of London's Tate Museum. The project, which was spearheaded by Bono's advocacy organization — the ONE — was the kickoff to the week-long “agit8,” an artistic statement geared to force the world leaders meeting soon after for the G8 World Summit to take a stand against world poverty. Artists were urged to record a new rendition of a notable protest song. Jardine also recorded and submitted his version of Pete Seeger and Lee Hays' folk classic “If I Had A Hammer.”

A Postcard From California, deals specifically with the California experience and touches upon the journey Jardine and his family started in the early-'50s after relocating from Lima, Ohio: “We moved to San Francisco. My family moved through the Bay Area. My first impressions of California coming from the Mid-West — because we're all immigrants — from the first it was exciting to me. Y'know, seeing my first palm tree, my first mountain, my first set of mountains — and particularly the ocean — most importantly the ocean. And my brother and I ran down to the beach and we tasted the water, that was more important to us, because then we knew it was the Pacific Ocean, that we could taste the salt water.”

Throughout 1962, Jardine, who had left the band to attend college, would pop back into the lineup to fill in for the road-weary Brian Wilson. When fellow co-founder David Marks quit the band in late 1963 to start up his solo band, David Marks & The Marksmen, Jardine became the band's rhythm guitarist for the next 35 years until inner-band politics finally forced him out of the Beach Boys.

Biographer Jon Stebbins — who wrote the groundbreaking 1999 book The Real Beach Boy: Dennis Wilson, along with the recently published, The Beach Boys In Concert! – The Complete History Of America's Band On Tour And Onstage with Ian Rusten — says that although underrated, Al Jardine's decidedly non-flashy guitar work has always been an important element in the Beach Boys live sound: “I think he's a fine guitar player. He's from the accompanist tradition, where your guitar playing is just accompanying your singing.”

Stebbins told us that although people refer to Jardine as the band's secret weapon due to his ageless vocals — he's always been an MVP within the Beach Boys: “He certainly was not invisible on their records. Y'know, in their sound, I think he was a real great texture to their vocals. Just, y'know, another part of the spectrum or their prism of colors that comes through in their harmonies. Y'know, you've got the three brothers and the cousin — but you add him to it and it just blasts into vividness in their harmonies.”

By the late-1960's Jardine had come into his own in the group, contributing flawless harmonies and an ecological theme in his songs which predated most other bands' return to nature-based material.

Throughout the years, Jardine has written and produced many California-themed songs for Beach Boys albums, including the “California Saga” suite with Mike Love from the group's 1973 Holland album, and “Santa Ana Winds” which he co-wrote with Brian Wilson for the group's 1980 Keepin' The Summer Alive album. In 1981 the Beach Boys scored their first Top 20 hit in over five years with a Jardine-produced remake of the Del-Vikings' “Come Go With Me.”

Following the death of Carl Wilson in 1998, Jardine was forced out of the Beach Boys by Mike Love. Years of lawsuits followed as Jardine battled for the right to bill himself as a Beach Boy.

David Marks, who remains close with Jardine and often performs with him, absolutely understands why he fought so hard to retain his title of Beach Boy after being forced out of the band in the late '90s: “Because it's a spiritual thing, man. That's why. You're used to being this guy for your whole life, doing one thing and then boom! It's gone. And you're going, 'Well, now what? I've got a beautiful farm in Big Sur which is nice to come home to. . . ' Wouldn't you miss going on the road and playing those songs?”

In 2006, after a decade-long hiatus, Jardine joined Wilson on select concert dates where the pair played a two-hour show including numerous Beach Boys hits and the group's 1966 album Pet Sounds in its entirety.

During the Beach Boys' short-lived 2012 50th anniversary tour, Jardine's vocal spotlights were often singled out as the show's high-points — including, “Then I Kissed Her,” “California Dreamin',” “Cotton Fields,” “California,” “All This Is That,” “Come Go With Me,” and “Help Me, Rhonda.”

Mike Love, who holds the license to the Beach Boys' name, has chosen not to carry on performing with Wilson and Jardine, instead exercising his option to tour with his usual side musicians under the group's moniker. During 2012's dates, he admitted to being floored by Jardine's pipes and his stage presence: “He sings his ass off. He sounds so good. So, I am really happy to be there with him. His hiatus from the group and all that has made him a better contributor. Yeah, he's more straight-ahead and really does a great job. And this tour, it's fantastic having him with us.”

Brian Wilson told us that he's thrilled to have his high school buddy Al Jardine hitting the boards with him every night out on the road: “Well, he's a great singer, one of my favorite singers, and he's always good — he never ever screws up. He's always good.”