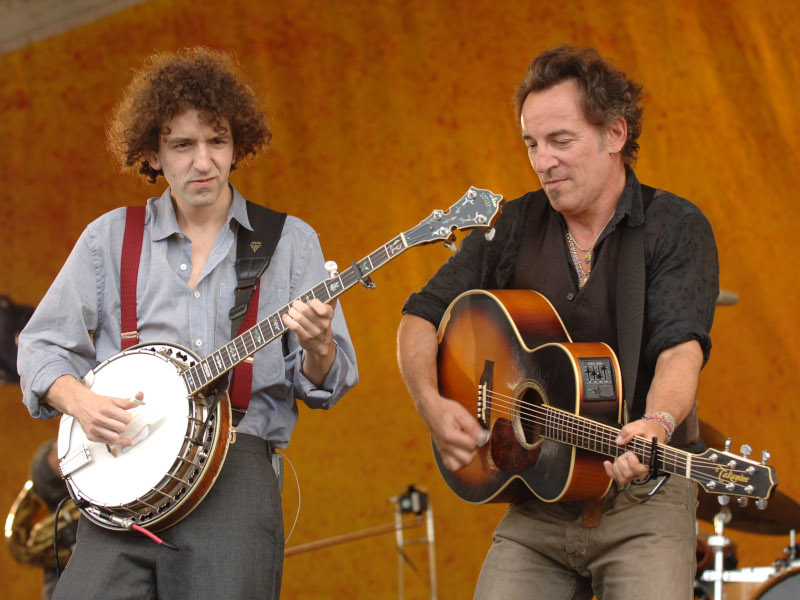 Springsteen's Sessions Band was named after his then-new album We Shall Overcome: The Seeger Sessions. In addition to the Americana heavy set, the new 2006 release features such catalogue favorites as “Atlantic City,” “Growin' Up,” “Open All Night,” The River,” “Long Time Comin',” “Ramrod” and others.

Billy Joel told us he was a huge fan of Springsteen's 2006 folk-driven Seeger Sessions album and tour. He believes that one has to get into a very specific mindset to do any type of covers project — let alone one with such socio-political implications: “Sure, Pete Seeger wrote a lot of great stuff, but I think you kinda have to put yourself in that place. I think you kinda have to feel like Pete Seeger to do that. And I know that Bruce is very social-minded (and) political minded — and of course that's what Pete Seeger was. I don't think that way. I. . . I'm an abstractionist. The music comes first. The music is the message.”

Pete Townshend and Roger Daltrey recently discussed the hurdles in creating new Who music together, and Townshend touched upon how artists need to move in different directions — much like Springsteen's Seeger Sessions project: “I think it's interesting that when you look at other artists, for example, as a Bruce Springsteen fan from the very, very start, y'know, I wanna hear him grow from within the framework from what I recognize, and what I believe is Bruce Springsteen at his best. I don't want him playing all that hillbilly music! All that hee-haw on the Hudson River nonsense, y'know? So, I think in a sense, we're in the same boat. (Roger Daltrey): Maybe we can do that? (laughter).”

“John Henry”
“Old Dan Tucker”
“Atlantic City”
“All The Way Home”
“Long Black Veil”
“Jesse James”
“O Mary Don't You Weep”
“Growin' Up”
“Erie Canal”
“My Oklahoma Home
“The River”
“Mrs. McGrath”
“How Can A Poor Man Stand Such Times and Live?”
“Jacob's Ladder”
“Long Time Comin'”
“Open All Night”
“Pay Me My Money Down”
“My City Of Ruins”
“Ramrod”
“When The Saints Go Marching In”
“This Little Light Of Mine”
“American Land”