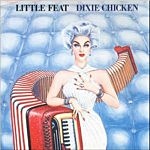 Drummer Richie Hayward says the new players' impact on Little Feat was immediate: “It got a lot better really fast from that point on. There was much more people to play off of.” But, he noted, that didn't always come easy: “Groovewise, there was a lot of psychic arm wrestling going on for the next bunch of years. We were all coming from different places, and to make it work, there were a lot of compromises made, voluntarily and involuntarily. It turned into this hybrid that kind of fed itself.”

Keyboardist Bill Payne says the new trio affected Little Feat's sound in an unanticipated way as well. “Lowell and I thought we'd actually be heading in more of a rock-and-roll direction with Paul, Kenny, and Sam; harder stuff, not as laid-back. And it was true, but it had that edge of the Southern rock thing, which we didn't really think about one way or the other — we just asked ourselves if it felt right.”

Martin Kibbee, who co-wrote Dixie Chicken's title track, says singer-guitarist Lowell George came up with the music for the song first and then presented it to him for lyrics, which came to him when he was driving home from Little Feat's Los Angeles rehearsal space after a late-night session. “I drove past this place with a sign that says 'Dixie Chicken.' By the time I got home, I'd written the lyric. I showed up the next day; they were rehearsing on the soundstage at Warner Brothers that day. Lowell read it and said 'You f***in' nut. No way.' I was gratified that a mere six weeks later, the guy was wearing a chicken suit. He was very resentful.”

The chicken suit was an outfit Little Feat used to promote the song and the album. Members of the band would dress in it to deliver boxes of Kentucky Fried Chicken — with specially designed boxes featuring the album cover artwork — to radio station programmers.

The stunt didn't sit well with the band, however. Barrere recalls that “We were doing all the promotional bulls**t, and then we'd go see there were no records in the stores. So Lowell hit the roof, and when we got back to L.A., he put everything on hold.”

Little Feat did, in fact, break up briefly, with Payne going on to tour with the Doobie Brothers and Bonnie Raitt. George eventually called the band together again.

Despite a strong critical buzz, neither the Dixie Chicken album nor the single charted in Billboard.