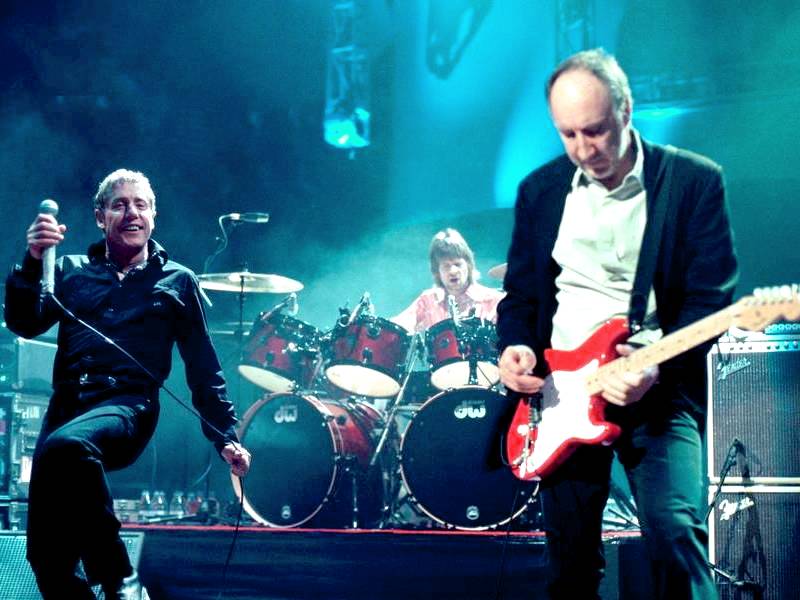 Happy Birthday to Ringo Starr's eldest child — and the Who's drummer since 1996 — Zak Starkey, who turns 57 today (September 13th)!!! Zak, whose mother was the late-Maureen Cox, was the second “Beatle baby” born, following John and Cynthia Lennon's son Julian Lennon who was born in 1963. Ringo and Maureen went on to have two more children — Jason in 1967 and Lee in 1970 — prior to the couple's 1975 divorce. In August 2016, Zak became a grandfather, when Ringo's great-grandson Stone Zakamo Low, was born to Zak's daughter Tatia Starkey and her partner Adam Low.

Back on March 21st, Starkey, married his girlfriend of 18 years, musician Sharna “Sshh” Liguz, at L.A.'s Sunset Marquis. The couple chose the date to fall on daughter Luna Lee Lightnin's first birthday. Zak was given away by his Beatle dad, with Pearl Jam frontman Eddie Vedder serving as his best man.

In addition to the Who, Zak has drummed for his dad's All Starr Band, Oasis, the Waterboys, Johnny Marr & The Healers, among others. Zak is also the guitarist in his own side group, SSHH, with wife Sharna Liguz, fronting the band. In 2016, the couple released their first album titled, Issues, with all proceeds going to benefit Teenage Cancer Trust. For each track on the covers album, Zak and Sshh tapped heavyweights from the bands who originally recorded it — including drummer Clem Burke on Blondie's “One Way Or Another,” bassist Glen Matlock and drummer Paul Cook on the Sex Pistols' “Problems,” Kenney Jones on the Small Faces' “Tin Soldier,” Mott The Hoople & Bad Company's Mick Ralphs on “All The Young Dudes,” the Pretenders' Martin Chambers on “Private Life,” along with Eddie Vedder with Peter Tosh's Word Sound And Power tackling “Get Up Stand Up,” among others.

Although Keith Moon did not give Zak his first drum kit — dad Ringo did — Moon is responsible for giving Zak his first professional set of drums — the white Premier drum kit which Moon used for his final tour with the Who in 1975 and 1976.

In 1996, the year he took over drum duties for the Who as they toured Quadrophenia, Zak Starkey explained his unique childhood relationship with Moon, telling Hello magazine, “We would spend a few days with Keith at his house in Malibu when we went to visit my dad in America, after my parents divorced in 1975. When Keith moved back to England, he would often pop in to see me or take me to dinner. I thought of him as a mate rather than an adult. He was always a very calm person when he was with me. He gave me an enormous drum kit when I was 12. It was a big white set. . . He used to encourage me a great deal.”

Zak Starkey recalled how Ringo didn't want him to follow in his footsteps — but Keith Moon had different plans for him: “He didn't want me to be in the music business. He wanted me to get a real gig — a real job. But, I was kind of subverted by Keith Moon, who was, like, almost like my uncle, but not related. And I used to hang out with Keith, and like, my parents would send me to spend weekend at Keith's house and he would just say, 'You're gonna be a drummer.' It'd had already happened and he just, he just rolled with it. When I was 12, I was already playing clubs and stuff, and there was no way (they) were gonna stop me.”

Part of the reason for Pete Townshend's eagerness to play out with the Who over the past two decades is his connection with Starkey: “He studied at the feet of Keith Moon. He was eight years old when I first met him, his dad is Ringo Starr, but Keith Moon bought him his first drum kit. He was a big Who fan as a kid. So when John (Entwistle) passed away, suddenly there was Zak and I — and then what I realized is that he and I have this extraordinary chemistry. And it's innate. It's a chemistry that's based on the fact that whatever I do, he's already doing it.”

Pete Townshend's younger brother and Who touring guitarist Simon Townshend also joined the Who in 1996. He told us says that although Zak Starkey is reminiscent of Moon at times — he's really is his own man: “I'm glad Zak does it the way he does it. He doesn't have too many restrictions and he certainly doesn't copy anyone. He uses ideas, but he doesn't copy anyone. He does his own thing.”

Blondie drummer and co-founder Clem Burke has been a disciple of Keith Moon's since he first began hitting the skins. He told us that Zak Starkey and the Who make a perfect fit: “Zak Starkey's an amazing drummer, and obviously he's an amazing legacy with his dad, and he's doing a great job. So, Zak Starkey's the perfect drummer for the Who.”