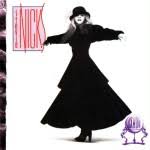 ‘Talk To Me’ – Stevie Nicks

The big hit from Stevie Nicks's third album, “Talk To Me” reached Number Four on the Billboard Hot 100, the second highest charting single of her career after 1981's “Stop Draggin' My Heart Around.”

“Talk To Me” was also the Number One song on Billboard's Album Rock chart for two weeks and was Number 68 on the U.K. chart.

Nicks said “Talk To Me” was a hard song to sing, but she was impressed by “Missing You,” which Chas Sanford had co-written with John Waite, and she “loved the words to 'Talk To Me.' It took a long time to finish it, though.''

Nicks was ultimately inspired by session drummer Jim Keltner, who stayed to listen to her record the song after doing some overdubs for another track on the album. “He stayed to be an audience, to push me a little, to make me get a great vocal. So I had someone to sing to, and I got the vocal. I put some tambourine on it, and it was finished… That was one of my unforgettable moments.”

Despite the success of “Talk To Me,” the Rock A Little album was a bit of a commercial disappointment for Nicks. It reached Number 12 on the Billboard 200 after her first two albums hit the top five, and while it was certified platinum, it lagged well behind its multi-platinum predecessors Bella Donna and The Wild Heart.

Rock A Little also hit Number 30 on the U.K. chart.