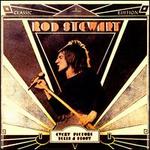 Every Picture Tells A Story shot to Number One in Britain and America simultaneously, the first record to do so.

“Maggie May” also hit Number One on the Billboard pop chart.

No one, including Rod Stewart, saw the potential of “Maggie May” as a single. Although it has gone on to become one of his most successful and enduring songs, it was almost left off Every Picture Tells A Story because its theme – a young man corrupted by an older, more experienced woman – was considered too maudlin. It was added because the album seemed too short without it.

Still, it was not released as a single, but tucked away as a B-side to “Reason To Believe,” from the same album. “If it wasn't for a diligent DJ in Cleveland who flipped it over, I would still be digging graves. Some guys have all the luck,” Stewart wrote in the liner notes to the Storyteller set.

The lyric is based on an experience in Stewart's youth. It seems he was looking for a way to sneak in to an annual weekend long Jazz Festival on the grounds of the Beaulieu House in Hampshire, England in 1961 when a “well built older woman” pulled him into her tent. Stewart recalls: “The whole thing didn't last more than thirty-five seconds.”

Stewart found mandolin player Ray Jackson, whose playing lent the song one of its hallmark signatures, in a London restaurant playing romance songs from the thirties.

Of playing with Jackson and other musicians, Stewart recalls: “In the studio I would just whistle the parts for them to play. That's one thing I pride myself on, coming up with melody lines for the instrumentals.”

Mickey Waller's drumming, highly praised over the years, was laid down with only the sparest essentials. “He used to turn up with just his snare, a bass drum, and sometimes a high hat,” Stewart says. “If you listen to “Maggie May,” there's no crash cymbals because he didn't use any.”

“Maggie May” is listed as Number 256 in The Heart Of Rock & Soul: The 1001 Greatest Singles Ever Made. Writes Dave Marsh: “In this world of tales more trustworthy than their tellers, its virtues shouldn't be so quickly dismissed.”